We had looked forward to this visit because of St. Augustine’s reputation as a fine stop along the ICW.  In the end, as a destination it has both highs and lows.

Our visit to St. Augustine started with a big happy knock on the hull.  We were just settling into our slip at the Municipal Marina and thinking about how to spend our time when we had that unmistakable knock-knock-knock.  Who’s there? Total strangers!  It’s that Facebook thing again…  Tim and Diane off the Kadey Krogen Acadia had come to visit, bearing gifts no less.  SPAM! and Key Lime Pie!!!  How on earth did they know?? 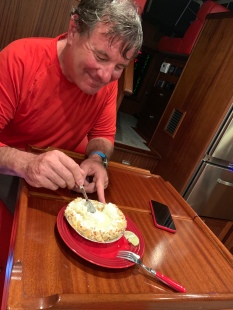 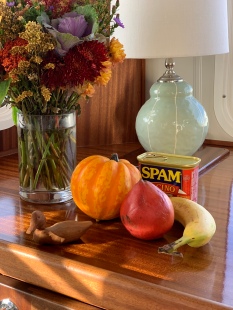 We have had enormous fun on this trip getting to know new friends through Facebook groups.  Who knew?  As we post our adventures — actually Bruce is the one doing most of the posting — to the Trawler Living and Cruising Facebook page, folks have come to know who we are and now look for us when we are in port.  Great fun, such a terrific new angle to cruising in the internet era.  Friends from inside my computer.

Anywhooo, Tim and Diane proved to be great entertainment.  Through them we met Scott and Teri on Miller Time.  Then we re-connected with Dwight and Amanda from Toronto & Jamaica (who we had actually met in Amelia Island when they had their power cord stolen) aboard their Hanse 41.  At some point during our stay we also met Paul & Janet from Seattle aboard their Nordic Tug 37 New Freedom, Gino & Carolyn (friends of Bob and Carol Hazleton), sailors from RI aboard their Brewer 44 Andiamo, and Susie and Ron of the Flemming 65 Bee Haven.  Thus St. Augustine proved to be a delightful melting pot of nomadic like minds. This is one of the best parts of cruising: new friends who just make life better and more interesting.

St. Augustine, founded in 1565 by  Florida’s first Governor, Spanish Admiral Pedro Menéndez de Avilés, is the oldest continuously inhabited European-established settlement within the continental United States. The city served as the capital of Spanish Florida for over 200 years. It was designated as the capital of British East Florida when the colony was established in 1763 until it was ceded to Spain in 1783. Spain ceded Florida to the United States in 1819, and St. Augustine was designated the capital of the Florida Territory in 1821. Since the late 19th century, St. Augustine’s distinct historical character and Spanish influence has made the city a major tourist attraction.

As it was early December, we had arrived at the height of St. Augustine’s “Nights of Lights” festival.  Since St. Augustine is a tourist mecca already, add the holidays and “Nights of Lights” to the mix and it is downright overrun.  I was a little dismayed.  We had heard stories about what a delightful destination it is, a wonderful town.  True, yes, but I was unprepared for the tourist-centric atmosphere.

The St. Augustine Municipal Marina is smack in the middle of Historic St. Augustine, and with this comes both the good and the bad.  There are loads of shops and restaurants.  The historic town is interesting to wander through, and the primary historic markers, the Castillo de San Marcos, the Ponce de Leons bridge, and the historic old town, are fun to visit.  However…

St. Augustine is not without its issues.  The tourists.  And the homeless.

As a destination by boat St. Augustine has lots to offer, but in a number of ways it also falls short.  It’s one of those towns that has no basic services within walking distance.

Need a grocery store? Forget it.  A pharmacy? Walk seven miles round-trip.  It is all about the tourists.  There is ice cream and taffy and donuts and pizza.  There are souvenir shops, pirate shops and countless restaurants. Busloads descended each morning.

This tourist focus was disappointing, as we tend to like stops that have real community to them and we found little of that in St. Augustine. We fortunately we did not need much in the way of groceries. I finally purchased milk at a bakery that sold me a large cupful.

So we adapt!  Walking the dogs around town early — before the tourists stumble out for souvenirs and ice cream — was good fun.  Some of the old homes and buildings are truly interesting and impressive, and wandering the neighborhoods beyond the reach of tourists was very gratifying. I found some wonderful running routes out over the Ponce de Leon Bridge where I payed a quick visit to the historic St. Augustine Lighthouse,  then cruised around the historic old town dating back to the 1700s, and through the Lincolnville neighborhood which was established by former slaves after the civil war and is now on the National Register.

We enjoyed a somewhat raucous tour-and-tasting with our new boat-friends at the St. Augustine Distillery, which started life in 1907 as an ice house.  Our guide was a hoot, and the spirits were interesting enough that we bought a couple of bottles. I’m not convinced the quality would impress die-hard bourbon drinkers, but then, what do I know about that?

Nearby architecture includes Flagler College, the Lightner Museum (an 1887 Spanish Renaissance Revival-Style building on the National Register, built as the Hotel Alcazar to attract wealthy tourists), the Villa Zorayda Museum, (built in 1883 by the eccentric Boston millionaire Franklin W. Smith as his winter home, inspired by the 12th-century Moorish Alhambra Palace in Granada, Spain), the Governor’s House and the Cathedral Basilica.  All these, and more, are impressive and worth exploring. 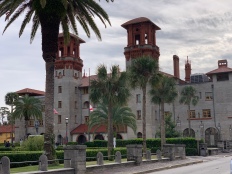 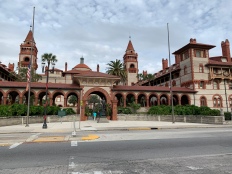 The evenings were spectacular with “Nights of Lights”. We enjoyed a couple of dinners out, once with a childhood  friend of Bruce’s who drove in to meet us for the evening and took us to the funky and fun Prince of Wales Pub (can you say fish ‘n chips?).  John was a wealth of knowledge about St. Augustine and we enjoyed his commentary immensely.  Better than any tour guide.  We had two meals at Gauffres and Goods, featuring simple but excellent polish and greek food. and Bruce couldn’t pass up a stop at Pizza Time, rumored to be the 2nd best pizza in the country.

We also happened to be there the night of the Christmas Boat Parade.  There was huge build-up to the event and we felt like everyone in northeastern Florida was going to be there.  They expect something like 50,000 visitors to descend on the town for the event.  In the end, the town was spectacularly-lit-up, and the crowds did indeed descend.  There was a truly festive atmosphere, very fun and family-friendly.

And trying to get a seat in a restaurant that evening was impossible.  By the time the parade started, we were fried.  Bruce retired to the boat.  I took the dogs for a walk among the mob and we did see the  lighted boat parade, but in the context of the hype it was (in my view anyway) a total bust.  Maybe a dozen boats.  Perhaps two that were elaborately-decorated, and the other ten were lame.  But the mobs seemed to enjoy it and now I’ve been-there-done-that-don’t-need-to-see-it-again.

While in St. Augustine we finally received our new Stidd flybridge seat.  This long-awaited shipment, which had been shipped-returned-re-shipped-re-returned several times, finally found us.  It was worth the wait.  Bruce carted it down the dock, we used the crane to lift it to the flybridge, and after some frustrating head-scratching, Bruce finally got it installed.  It was time for a celebration: the first of many Flybridge Evenings in our comfy new throne.  A little St. Augustine bourbon was in order.  Tah-dah! 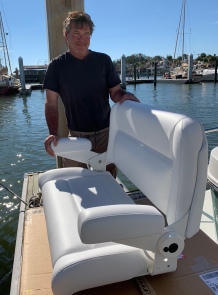 It was in St. Augustine that Bruce finally declared our diesel-fired hydronic heater Finally Working.  This was a momentous occasion and we will document the drama in detail at a later date.

We did enjoy our stay in St. Augustine in spite of the ups-and-downs.  For the first time on this trip, we finally felt like we were “in Florida”.  Although we did see some nighttime temps in the upper 30s, we also saw it hit 70 one afternoon. The smell of the morning hair, the warmish temperatures, the palm trees.  It was a good omen.

2 thoughts on “St. Augustine and “Nights of Lights””