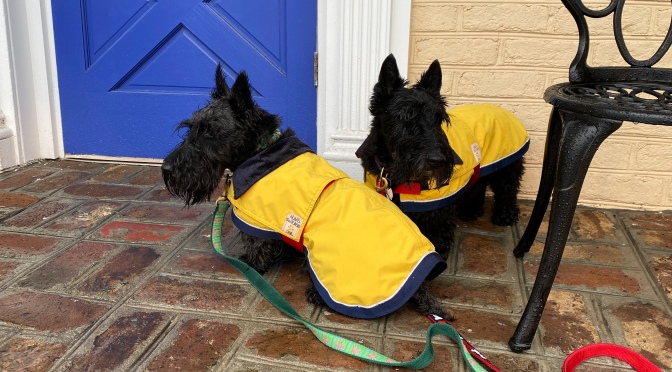 This fall trip south is truly a gale-ridden ride. They keep coming at us. Wild wind, wet conditions. Trying to keep moving and making certain to have safe harbor when we need it.

After three fun (but very wet and wild) days in Bald Head Island, we wanted to make tracks. The weather was not exactly cooperating, but it wasn’t stopping us either. When we got up it was 35 degrees. It would be a wet couple of days, but worse weather was on the horizon so off we went.

The Cape Fear River was doing her thing. we timed our departure to miss the worst of the current-against-wind nightmare. With a north wind blowing 20-30 knots, we did not want to be out there on an incoming tide. We left just before slack-before-ebb. It was still fiesty, as we expected, but little Esmeralde was up to the task.

It was a relatively short ride up the river. We turned into the ICW at Southport, which we are sorry to miss this year (no room at the inn), and headed down the ditch. Conditions changed dramatically, from heavy-duty-washing-machine-cycle to calm and pleasant. Cold, gray and wet, but pleasant. That warm dry pilot house thing: yes.

The trip was relatively uneventful, in spite of traversing some traditionally tricky shoal areas including Lockwood Folly, Shallotte and Little River. Three-and-one-half-foot draft can be very helpful.

Somewhere in all this, someone from our Trawler Life Facebook group spotted us and sent us a picture. Always exciting to see yourself under way!

This isn’t the most interesting stretch of the ICW, and the gray weather didn’t help with the scenery. There were plenty of examples of the hard life the shrimp boats live: always sobering.

We also had the notorious Rock Pile stretch to pass through. Shallow and narrow, the Rock Pile is menacing mostly because it is all rock rather than sand and mud. You don’t want to mess up here. You also don’t want to encounter any other vessels coming the opposite direction, especially a tug and barge. We made the recommended security call on VHF 16 and 13. Hearing no response, we proceeded. I always still have a bit of adrenaline going through here, worried that our call wasn’t heard or we didn’t hear a reply. Ugh. But we were fine. It was high tide so the photos don’t look like much: you can’t see all the ledge that is exposed at lower water levels.

The day was not without some fun. Shortly before arriving at Grande Dunes Marina, our destination, we came across a small skiff with two fishermen in it who appeared to be trying to paddle desperately upriver with their hands. We slowed up and asked if they needed some help. Yes indeed! It was a new-to-them boat, their first trip out, and the engine died. They had no paddle. We tossed them a line and towed them back to the launch ramp they had recently departed from. It’s nice to be able to do a good deed for a fellow mariner. They were very grateful!

Grande Dunes is just a convenience stop for us. For some reason it is always pouring rain when we stay here. It is, however, a nice facility with good staff, well protected, and easy-in-easy-out. There’s lots of space for the dogs to exercise including a large open field where we can safely let them off-leash, which is a rare perk on this trip.

Grande Dunes does have a Ruth’s Chris Steakhouse right on the property. It’s not our favorite spot, but since it is always pouring rain when we arrive, it’s a warm, dry respite and we take advantage of it.

The next day we had a reservation for two days at the Harborwalk in Georgetown. We were looking forward to it, as Georgetown is one of our favorite stops. We got a call in the evening from the dock master, asking if we still planned to arrive the next day. YES! With more bad weather in the forecast, boats already there were trying to extend their stay. The dock master promised he would clear space for us. After dinner we tucked in for an early evening, with an early start planned for the morning.

Myrtle Beach to Georgetown via Socastee and the Waccamaw River

We were up and walking the dogs before dawn in the pouring rain. No one was happy about it, but it had to be done. We were under way by 6:45 am. Let’s get’r done.

This stretch of the ICW took us through Socastee. This is an old community, and the ICW laps at its banks, dangerously flooding at times. A year ago we passed through during historic flooding, and the water was washing into people’s living rooms: hard to watch. Levels were high this year, but generally not over the banks. There was a lot of new construction and remodeling thanks to the floods the previous year.

We really enjoy this run between Myrtle Beach and Georgetown. The ICW turns in to the lovely and historic Waccamaw River. We enjoyed the ride even in the rain. This is rice and indigo plantation territory. As we looked into the trees along the river edge, you could see a dark line Showing how high the flooding had been the year before: impressive.

As we approached Georgetown, we heard a call on VHF for “Esmeralde”. That was odd? We tried responding but apparently we could not be heard. Huh.

Our arrival at The Harborwalk Marina was expected and uneventful. There was indeed space for us alongside. We were greeted shortly after we arrived by a Facebook group friend, Woody Cooper, who generously offered transportation or whatever else we might need during our stay. Very nice.

We gave the pups a very wet walk around town, and got some cookies at the Indigo Bakery. Nice treat. We also met Tim and AJ and their dog Jasper aboard OLOH. I had stumbled across the OLOH web site last year while doing research for our trip, so it was fun to see them in real life.

We enjoyed a ‘tini onboard ESMERALDE, then wandered over to Root, one of our favorite restaurants of the trip, for an early dinner. By the time we were finished the rain had begun to dry up, and we were able to give the pups some decent exercise before we all turned in. Georgetown is a lovely town to walk around, with it’s stately southern mansions and astonishingly beautiful live oak trees draping the residential streets. Very southern graceful.

The next day we waited for yet another gale to spool up. We were glad to be tucked in and safe, yet again. Georgetown was hospitable. I enjoyed a delightful run before new rain hit. There was a lot of street flooding from the previous days’ rain, but I was able to find a good route and enjoyed the fall scenery. We had a lazy day, gave the pups some exercise, bought some fresh shrimp at Independent Seafood, and returned to Root for yet another good dinner. Always an acceptable way to beat cabin fever in inclement weather.

Georgetown to Isle of Palms

The forecast for the next day was still dismal: rain and wind leftover from the gale offshore. We decided to keep moving anyway, and it was a good choice. The OLOH crew got some photos of us leaving the dock: thank you!

It was very windy and sporty running down the bottom of the Waccamaw, but once we turned into the Estherville Minim Creek, we were largely sheltered from the wind and the cloud cover began to break.

This is an incredibly beautiful stretch of waterway. Waterfowl and marsh life are plentiful and active. We meandered through the Tom Yawkee Wildlife Center, the Santee Coastal Reserve and the Francis Marion National Forest. We had plenty of water through what can be angonizingly shallow strips thanks to the tide cycle. Dredging was still going on near McLellanville, a notoriously shoal area, but much had been completed so we had no concerns.

We stopped at Isle of Palms. I am happy enough there, but Bruce doesn’t like it much. They unfortunately changed our slip from a promised one inside the basin to an exposed and dilapidated slip right on the waterway, where we were constantly buffeted by wakes. By sunset, though, river traffic vanished. We enjoyed a lovely sunset and a good night’s sleep.

We enjoyed a leisurely morning walk through Isle of Palm’s residential neighborhoods with the pups before getting under way for Charleston. It was a foggy, drizzly breezy morning. We timed our trip out the Narrow Channel and the Ben Sawyer Bridge so that we could run up Charleston Harbor and come alongside at the MegaDock at slack tide, mid-day. It worked beautifully. We were delighted to be in Charleston, where we would pause for about a week and we had a lot planned. Piles of boxes were waiting for us. Bruce was itchy to get working on our new engine mounts. Engine vibration be-gone!