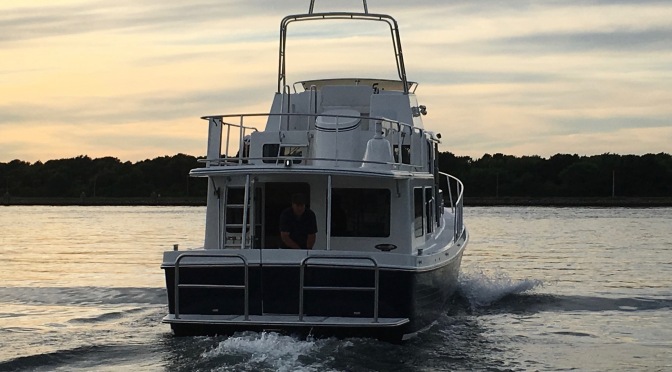 Since both of us are sailors, one of the big factors as we contemplate a move over to the dark side is figuring out exactly what “power boating” is all about.  For me, some of the big questions are: What is it like to spend a day ‘motoring’ instead of ‘sailing’?  How fast do we want to go?  How comfortable/loud/smooth/rolly/jarring is it at different speeds?

Bruce, in addition to those questions, is concerned about all kinds of mechanical and drive train issues.  In the American Tug 395, which engine should he get: the 380 HP or 480 HP? What propeller would be best?  What is the actual fuel consumption at different RPMs?  And on and on and on.  We have a lot to learn, and a lot of decisions to make as we approach construction deadlines.

Thus we were thrilled when we had an opportunity to make an 80-mile run on East Coast Yacht Sales’ brokerage AT 395 from Stonington, CT to Sandwich, MA at the Cape Cod Canal.  ECYS was running the boat up to Maine for the summer, and we hopped on for the first leg of the trip with captain Jason Phippen, and brokers Spencer Drake and Nick Johnstone.  All of us are sailors first, so it was a great bunch to interact with while running the boat.

Side Decks – Side Rails

We addressed one of our questions as we left the dock.  The Great Side Deck Debate.  Just how wide are they?  Can you walk easily from the cockpit to the bow?  In what conditions?  Do we want full-length side rails or not?

While we understand that the safest answer probably is to install full-length side rails, our experience during the day left us with the impression that in the end, we would be happier with half-length rails.

The side decks are roughly nine inches deep from the cabin house to the (very low) toe rail, and they are almost 13 inches all the way to the edge of the hull.  This leaves plenty of room for footing for my small feet, and just barely enough for Bruce’s size 13s.  However, with full-length rails there would be too much opportunity for Bruce to catch his feet on a stanchion while moving fore and aft.

There are good hand-holds on the upper deck rails.  It’s easier to jump on and off the boat to a dock without rails.  While I wouldn’t want to negotiate the side-decks in rough weather, the AT has pilot house doors to both side decks, so you can go bow-to-stern inside the boat whenever things don’t look so good.

Another of our big questions is: just how fast (or slow) is the boat?  We’d been hearing everything from “it’s a 17-knot boat” to “It’s an eight-to-ten-knot boat.”    The delivery gang humored us by running the boat at different speeds to test things out.  In flat conditions, without a full instrument panel, these are the rough numbers we saw:

This data was on a boat that was not fully loaded, but had mostly full fuel and water tanks and five people aboard.  The bottom was slightly foul.  The engine is a Cummins 6.7 QSB 380 HP with a 4-blade propeller.  Our summation is that it is quiet with a nice, easy ride at eight to 10 knots.  Twelve knots is a flat, comfortable ride, but you begin to feel the speed and sound.  Beyond 12 knots was stable and comfortable, but began to get a little loud — fine for quick bursts, but not comfortable for long hauls.

Just how loud is loud?  Bruce has an app on his iPhone called SPLnFFT Sound Meter that measures decibels.  On our sailboat, we get roughly 70 dBs in our cockpit at six knots.  In the Tug’s pilot house with windows and doors open it was quieter than the sailboat’s 70 Dbs to about 12 knots.  Beyond that, it was noisier. The dB measurements on the iPhone matched the actual sea trial data from American Tug for this boat.

Bruce has been struggling with making a decision on which engine he wants.  The standard engine is the Cummins 6.7 QSB 380 HP with a 4-blade propeller.  Also offered is the 480 HP, which is basically the same engine with a slightly larger turbocharger, a remapping of the fuel system, a different transmission to handle the extra power, and a five-blade propeller which is arguably smoother.  The larger engine has no real downside (other than cost), and it gives you an additional four to five knots of burst speed if you ever need it or want it.

The one concern we have with the drive train is that when Cummins switched from manufacturing the 5.9 over to the 6.7 engine, they changed engine mount suppliers.  The new mounts are noticeably stiffer and introduce more vibration into the boat.  We detected this, as we had been out on an AT 345 with the 5.9 a week earlier, and that boat was noticeable smoother than the 395 with the 6.7.  Obviously there are many variables from boat to boat that could cause the vibration, but after a lengthy conversation on the subject with AT, we really believe the engine mounts are the culprit.  American Tug is working with Cummins to try to get them to go back to the old engine mount supplier/design, and we’re hoping this gets implemented before our boat is built. 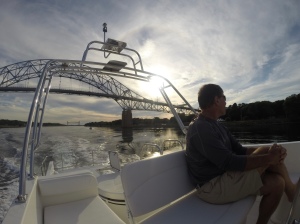 We have always figured we want a flybridge, and this trip sealed the deal.  We can’t imagine getting the boat without one. Even with 15-20 knots of apparent wind up top, it was a great place to be.  The venturi is incredibly effective at deflecting the wind, so it was perfectly comfortable.  This boat did not have a bimini over the flybridge, but we will definitely have one, for sun protection. We don’t plan to enclose the flybridge, at least for now.  We don’t want the extra windage, and we can always retreat to the pilot house if the weather goes bad.

I suspect it might be nice to have an enclosed flybridge when we do the ditch down to Florida, or the Great Loop, but for now, we’ll do without.