The last 12 months have been a hiatus in my running adventures.  In 2015 I developed achilles tendonitis, which kept my training at a painfully low level.  Then in September, just as I was planning to ramp things up for the fall, I suffered a tear in my left gastrocnemius = end of fall running.  Also in 2015 I struggled increasingly with my left shoulder, which had been damaged and surgically repaired as a teenager.

Fast forward to December 2015, I finally went to an orthopedic surgeon, got my shoulder x-rayed, and was promptly diagnosed with severe arthritis.  The fix? A total shoulder replacement.  Eeeek.   END_OF_DOCUMENT_TOKEN_TO_BE_REPLACED

Since both of us are sailors, one of the big factors as we contemplate a move over to the dark side is figuring out exactly what “power boating” is all about.  For me, some of the big questions are: What is it like to spend a day ‘motoring’ instead of ‘sailing’?  How fast do we want to go?  How comfortable/loud/smooth/rolly/jarring is it at different speeds?

Bruce, in addition to those questions, is concerned about all kinds of mechanical and drive train issues.  In the American Tug 395, which engine should he get: the 380 HP or 480 HP? What propeller would be best?  What is the actual fuel consumption at different RPMs?  And on and on and on.  We have a lot to learn, and a lot of decisions to make as we approach construction deadlines. END_OF_DOCUMENT_TOKEN_TO_BE_REPLACED

I like to eat (and drink) seasonally.  Each summer since we were married, we have spent the month of August sailing along the coast of Maine.  There I indulge in my taste for Maine lobster and wild Maine blueberries.  This year we are missing Maine, and I am missing my lobster and blueberries. END_OF_DOCUMENT_TOKEN_TO_BE_REPLACED 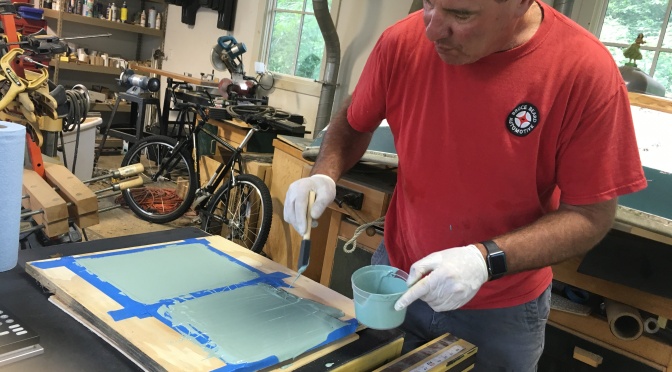 Actually, the process began quite awhile ago, but this is the first concrete step we can document (other than sending a deposit check…which is done!)

What color will the boat be? END_OF_DOCUMENT_TOKEN_TO_BE_REPLACED

We didn’t rock much of anything, but the Block was rock’n on the 4th of July weekend.

We wanted to get settled and enjoy a few peaceful days before the mob showed up, so we motored over on Tuesday and got settled in.  All the town moorings were occupied already (by boats that had been left there the previous week, we later learned, to secure a spot for the 4th.)  Fortunately we were able to snug up on a private club mooring we have access to on the western shore of the harbor, which is very pleasant.  We made it to The Oar several times for some drinks, dinner and beautiful sunsets over the Pond, and enjoyed rambling around the island with the dogs.  It was very relaxing, but by Friday, the pace started to pick up. END_OF_DOCUMENT_TOKEN_TO_BE_REPLACED

We'd love to hear from you. Send us an e-mail.
BruceBeard.com
Loading Comments...