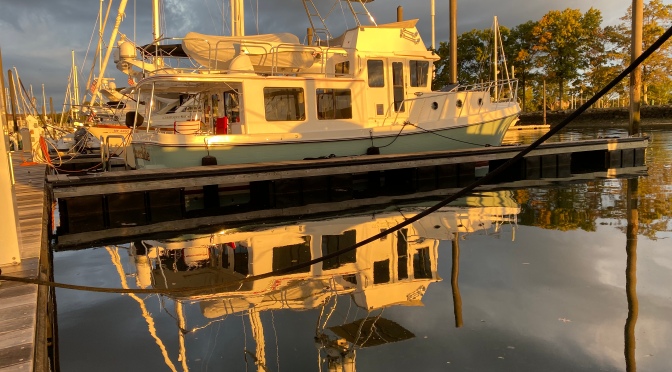 Esmeralde is on the move. So are the fall gales, just like last year.

Thus begins our Winter Cruise 2019 – 2020. It will generally be a re-run of last year’s trip down the ICW to Florida, across Lake Okeechobee, along the Gulf Coast then down the the Keys. We will stop at some of our favorite spots from last time, and also add as many new destinations as we can.  There is plenty to see and do. And, of course, it is a great way to get away from the New England winter cold, ice and snow. END_OF_DOCUMENT_TOKEN_TO_BE_REPLACED

A Maine Cruise was not on our summer plan, but we find ourselves on our way!

Since we expect to be on the boat for an extended cruise over the winter, we had planned to stay close to home this summer. However, a quick road-trip to Maine a few weeks ago for some family matters gave us just enough of a taste of Maine that we looked at each other and nodded in agreement: yup, we want to do Maine. Again. END_OF_DOCUMENT_TOKEN_TO_BE_REPLACED

We took delivery of our new American Tug 395 Esmeralde on April 1st, 2017, so she will forever be our April Fool’s Girl.  (This year, she was also our Easter Girl.)  In order to celebrate, Bruce got her winter cover off on Saturday so on Sunday April 1st, her birthday, we could have a little celebration on-board and herald the start of her second season.  It turned into a bright sunny day, perfect to enjoy being aboard again. END_OF_DOCUMENT_TOKEN_TO_BE_REPLACED 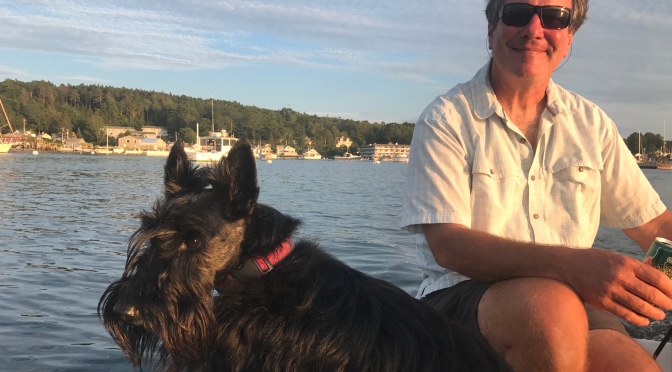 We have only cruised through Muscongus Bay once before, almost 20 years ago on our the first Esmeralde, the little Able Whistler 32.  I remember it as being a little bit of a hairy experience.  It was thick thick thick fog, we were navigating with a new GPS, and the screen was indeed a chart, but it was about 2″ x 3″, black and white, and didn’t have a lot of pixels.  We didn’t have radar.  How things have changed.  END_OF_DOCUMENT_TOKEN_TO_BE_REPLACED

We set out from Buck’s Harbor with a typical Maine forecast: FOG.  Make that RAIN and FOG.  It was clear enough getting through the harbor entrance, but then it socked in thick and stayed locked-on.  While I’ve done this for days on end in a sailboat, often with nothing but a dodger for some shelter, I can’t help but admit that being in a warm and dry pilot house was rather civilized.  Two large nav monitors, radar zoomed in, zoomed out.  And a Very Big Horn.  It was not a bad ride.  As usual, the lobster buoys commanded rather intense focus and tracking the numerous lobster boats cruising around like drunken flies was challenging, but in the end, Maine is Maine and FOG is part of the territory. END_OF_DOCUMENT_TOKEN_TO_BE_REPLACED

After our visit to the wild woodlands of Isle au Haut, it was time to head back to civilization.  Off to one of our favorite hang-outs, the home of Lifestyles of the Rich & Famous, Northeast Harbor on Mount Desert Island, and also home of the spectacular Acadia National Park and the tourist mecca, Bar Harbor. END_OF_DOCUMENT_TOKEN_TO_BE_REPLACED

After our excellent evening in Friday Harbor on Tuesday and the freshest salmon we have ever enjoyed, we had to get to Bellingham on Wednesday.  Our new dinghy, which would replace our dearly-departed 10-year-old dinghy, would be delivered on Thursday and all the associated bits-and-pieces would be installed.  More on that later.  For now, we had to get the boat the thirty miles or so in some snotty weather.  A good opportunity to see how she handled.  Shakedown, Part 3. END_OF_DOCUMENT_TOKEN_TO_BE_REPLACED

We'd love to hear from you. Send us an e-mail.
BruceBeard.com