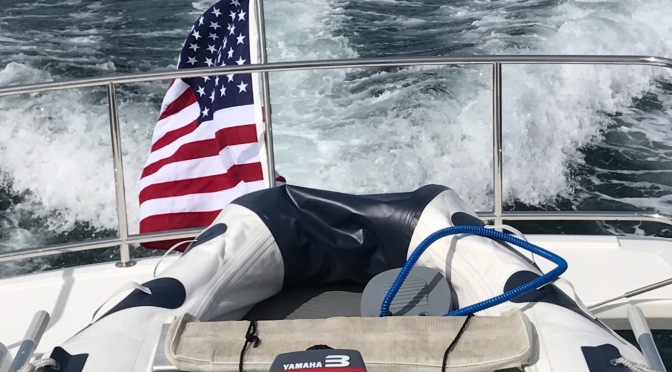 We didn’t really want to spend three days in Bellingham, but we are realistic about shaking down a brand new boat and understand that a certain amount of delay and cruising interruption is normal.  This is actually our second interruption, as we already spent three days in Anacortes for the same reasons: our dinghy and our generator.

The generator was fussy from the beginning, blowing smoke and running rough on startup. There was some head-scratching about it at first, but we didn’t take the issue too seriously until we got to Anacortes on our first day out of LaConner, when we knew we definitely had a problem.  Northern Lights sent a mechanic to Anacortes immediately.  He spent several hours testing and checking, and ultimately ordered three new injectors.  These were shipped overnight, and our trusty mechanic returned the next day (a Saturday) to install them.  Things seemed better.

We went off for a few days, and decided that no, it really wasn’t any better.  We had to be back in Bellingham for our new dinghy (see below) the following Thursday, so Northern Lights sent a Vice President out to Bellingham to meet us.  Brian spent the better part of the day in the engine room, as he and Bruce went through various scenarios which might be causing the problem.  Yet another guy arrived after 6:00 pm with a replacement injection pump.  An hour or so later, they cleaned up.  It might be fixed.

Bruce ran it again in the morning.  Same problems: lots of smoke and rough.  More head-scratching and a bunch of phone calls.  Finally, a lightbulb went off somewhere and with some tweaking of ignition timing, the generator began purring like a cat.  Awesome.  High fives to Northern Lights.  Although it took a few days, they were all over the problem from the git-go and kept the pressure on until the job was done.  Couldn’t ask for anything more.

This video clip gives an idea of the performance both before and after.

While our auto-pilot seemed happy at first, over a few days of cruising it gradually exhibited more and more signs of angst.  The compass could never get the true boat heading right, we started to get rudder error messages every minute or two, and the boat wobbled hopelessly off course until the whole thing would just throw up and say “I quit. You take over.”

Since we were in Bellingham anyway, we sent out an SOS to our electronics installer, Tony at Marine Systems Northwest.  He conferred with The Powers That Be at Garmin, and the decision was made to replace the Reactor compass, the rudder reference sensor, and for good measure, the course computer.  The parts were shipped overnight, and Tony and his sidekick Steve appeared on the boat to swap everything out.  Fingers crossed.  Bruce and I would do the calibration the next day when we (finally) left Bellingham.

Thankfully, the calibration went perfectly and the pilot has been happily ever after.

I’ll cover the rather large and subjective topic of dinghies in another post.  Suffice for now to say that since our original long-term plan for a tender was to use our beloved Trinka sailing dinghy.  Our short term plan, for here on the west coast, was to get one more month of service out of our trusty but aging AquaDutch roll-up that we had used for ocean passages on our Sabre sailboat.

A few repairs at home seemed to make the AquaDutch happy, but after shipping out to LaConner, it inflated once then gave up and became a pathetic limp noodle on our upper deck.  Cruising with two dogs that needed to get ashore, this wouldn’t do. We needed a reliable dinghy.  So we pulled the trigger: we would purchase a new rib and engine here, ship them home with the boat as our permanent tender, and sell the Trinka.  *sniff*

More cruising delays.  On the advice of Kurt at Tomco, we rang up Steve at Guyer Boatworks.  After some emergency research and a flurry of calls to our many inflatable expert pals, we selected an AB 9 VS Hardbottom with a Honda 10 Electric Start. Steve arrived to measure for fit while we were in Anacortes on Saturday after our Maiden Voyage.  He placed the order and asked us to be in Bellingham on Thursday for delivery and installation.  Another cruise delay, but OK.

Fast forward to Bellingham, Steve arrived with the kit and, with the wind blowing close to 30 at the dock and the Northern Lights team hard at work on the generator below, he got everything installed.  One hiccup: the Weaver Davits needed 6″ height extensions so that the dinghy wouldn’t be in the way of the upper deck hatch.  Those were ordered on Friday to drop-ship next-day, and we agreed to be in Friday Harbor on Monday to pick them up, hopefully on our way to the Gulf Islands. Stay tuned for the rest of THAT story, Shakedown – Part ###.

Since we were in Bellingham for three days, a few words about the place are in order.  We were busy with all the parts and bits and pieces, and Bruce had The Crud (otherwise known as the flu – thank heaven we have a second cabin/ManCave), so I was the one left trotting around town running errands and wandering with the dogs.

The whole marina waterfront area appears to be undergoing a slow and incomplete transformation from a very hardworking commercial scene to more of a mixed-use recreation-friendly environment.  It’s size is a little intimidating and not entirely user-friendly, but after three days I became sort of fond of it all.

However, once I found the drug store downtown, it was excellent, and the Community Food Co-op is outstanding!  It’s worth the trip to Bellingham — and he walk, and the train tracks, just for the Co-op. Thank you.

It did take me a while to find the LFS marine supply store.  For some crazy reason, none of the folks I asked about hardware and stuff thought of mentioning it.  Great resource.

Walking the dogs around the multi-use trail was perfect. The restaurant at the head of the dock, The Loft, was not haute cuisine but the bartender (from South Carolina or Georgia?) was great and the convenience was perfect.  We could have tried the pricier options — Anthony’s, Giuseppe’s and Hearthfire — but why bother when you have the flu?

I need to wrap this up by saying that while dealing with these issues has been frustrating, we knew all along that this would be a shakedown cruise and that there would be interruptions and delays.  The service on the back end by the various suppliers has been excellent.

I also need to underscore the fact that we remain thrilled with the boat and the job Tomco did putting her together.  None of these issues were Tomco issues.  We might have hoped they would have picked up that we had a generator issue before delivering the boat, but that’s just a maybe. It’s fussy behavior could easily be attributed to normal break-in.

On with cruising and learning more about the boat.

One thought on “Shakedown – Part 4 – Generators, Autopilots, Dinghies and Bellingham”