After our quick escape to Roche Harbor from Ganges, we pondered our options.  We could have spent more time — a lot more time — exploring the San Juans, which are beautiful.  Shakedown issues, and a bit of icky weather and our lack of a dinghy had prevented us from exploring them properly.  However, the clock was ticking and we were anxious to cover some new territory.

Going north to Princess Louisa and Desolation Sound were now off the table because of time constraints.  That left Puget Sound as a very attractive alternative.  That, and an implausibly benign day for running south, informed our decision.  We decided we would push for Port Townsend, either all in one day, or broken in to two days if weather kicked up in the Strait of Juan de Fuca.

It was about 40 miles, with possible adverse conditions (a building southeast wind against current) at the far end.

The run down Haro Strait was calm and pleasant, although grey.  In spite of a careful lookout, we saw no whales.  Crossing the Strait of Juan de Fuca started out calm enough, but the southerly built slowly as we proceeded south toward Port Townsend. By the time we approached Point Wilson we had 20 knots (true) on the bow and three knots of current against the wind. It got rather…feisty.

There was a very short, steep chop with a rapid period.  The pups were not happy and we had a steady supply of water over the bow.  The windshield wipers did yoeman’s duty.  Until one of them (the one in front of the helm station) died.  That’s when we realized that wipers can be very important.

The boat did great.  Finding a nice track through the seas was easy with some hand-steering.  Water continued to crash onto the foredeck and into the windshield, but the motion was tolerable enough.  Fortunately the fiesty stuff didn’t last long, as the fair four-knot current swept us along quickly towards our destination in spite of the chop.

As we approached Port Townsend’s Point Hudson Marina we were unable to reach anyone on the phone or VHF.  Knowing it would be tight inside the small harbor, and in spite of the solid 20-25 knots from the southeast, we decided to run in and take our chances that we’d figure something out once inside.

I always find it a bit of an adrenaline rush to cope with these situations. Since we had know idea if there would even be space for us, let alone what side we would lie to, we did not have lines and fenders set up.  In we went.

After a quick reconnaissance and conference, we decided to swing around bow-out and back down alongside a long float, between some whale watch boats and a lovely wooden schooner.  I held her on-station, bow into the wind, while Bruce scurried around setting up lines and fenders.  Then she slid right into her slot backwards.  Oh what a joy: bow and stern thrusters.  Bruce made the hike around the harbor and rustled up someone in the office who said we’d be fine where we were.  Thank you.

Bruce set himself to de-salting the boat, and I took the pups for a walk in town.  It was a short walk, as it was cold, very windy, and not at all pleasant.  I was still very much suffering from the nasty flu so I had a limited tolerance for discomfort.  Job done, back to the boat to rest and relax.

Port Townsend is a hub of wooden boat history and restoration in the Pacific Northwest.  When we geared up in the afternoon to explore the town, we started with the Northwest Maritime Center right alongside our dock.  In a handsome modern building right on the water, the Center is a terrific resource and fun place to explore.  All year long it hosts events, workshops, classes and gatherings, including the famous Port Townsend Wooden Boat festival which prides itself on being “the most educational and inspiring wooden boat event in the world.”

We continued south along water street, and in spite of the biting cold wind we enjoyed the picturesque architecture.  Lots of shops and restaurants lined the street, and most were quiet on account of the weather and the off-season.  We were tempted to explore the residential neighborhoods above the town, but the windy, rainy weather (and the flu) conspired against us.  We settled for a simple supper at a small Mexican restaurant, and headed back to bed. 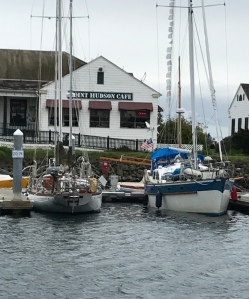 The next morning was a lot more pleasant.  We fueled up for the day at the inviting Hudson Point Cafe, which had beckoned us since we tied up across the harbor the previous afternoon.  I think this was our first real breakfast out on this cruise, and we enjoyed it.

Properly fueled, we set out to explore a bit more of town.  We started with the boat yards, which offered a rich supply of maritime culture and entertainment.

We were also thrilled to stumble on the home of Pygmy boats, which we have known about for many years.  Unfortunately they were closed, so we could only enjoy it from the outside.

Back on Water Street we poked into stores and galleries, enjoying the variety and unique goods and crafts.  Naturally we had to explore the local toy store, which featured classic toys from our childhoods.

Dorsey was delighted by “Rody” the Original Rody Horse, and Bruce insisted on actually buying one.  Dorsey chose red.  He attracted all sorts of attention as we carried him back to the boat.  One of those things that makes you smile in spite of everything.  He is now a permanent member of the Esmeralde crew, our mascot who will keep us in line as we explore new waters.

We enjoyed Port Townsend.  The weather and our weakened selves (the flu) kept us from being more curious and energetic, but it was still a delightful stop and promises a lot more than we took advantage of.  Time to move on.