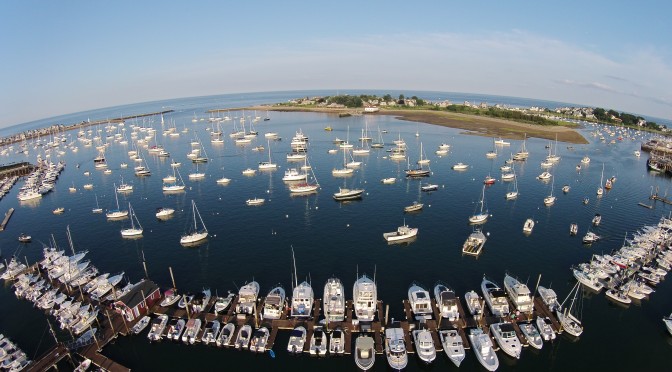 When we cruise, we rarely plan more than a day ahead.  And even when we do plan, we usually change our minds.  That’s how we got to Scituate.

Figuring out how to get to Maine is always a puzzle, especially with two dogs.  We sit with our iPads calculating the distances and times for different runs and argue the pros and cons of countless alternatives. On the sailboat(s) we generally did the straight shot overnight, either from Provincetown or directly from the Cape Cod Canal.  With the Tug, it’s different.

We had sort of thought we would go to Provincetown for one night and leap from there to Boothbay, a run of 120 miles.  We could do it in daylight, dawn to dusk.  An alternative was Scituate, which we had never been to before and which shortened the run to 110 miles, knocking about an hour off the trip to Maine.  We had heard good things about Scituate and thought something new and different would be fun.  Also, there is a new operation running the moorings in Provincetown and they charge $100 per night, which is double what we have ever paid anywhere for a mooring and therefore  a lot annoying.

We left Cuttyhunk on a beautiful clear Sunday morning at 0700, after taking the dogs in for a quick trip ashore.  The run up Buzzards Bay was calm and pleasant.  We had breakfast, more coffee, and discussed our  plan.  Provincetown, or Scituate, or Marblehead, or Gloucester, or, what?

It was’t until we approached the Sagamore Bridge that we finally decided: no Provincetown.  From Scituate, we could make the 110-mile run during daylight.  We could also get fuel there, so we didn’t have to stop in Sandwich.  So off to Scituate we motored!

The whole day was lovely, flat calm and sunny.  We fussed about, did small chores, and were generally lazy.  We ran at about nine knots, which is a little fast, but we wanted to have a little time there to enjoy the evening.  We made a reservation at the Scituate Harbor Marina for a slip, which would make the early morning start much easier than being on a mooring.  We could give the dogs a quick walk without the commute to and from a mooring, and we wouldn’t have to launch and haul the dinghy: a worthwhile splurge.

The approach to Scituate Harbor could not have been easier.  As you enter between the two breakwaters, the Scituate Lighthouse, built in 1810, sits on the north side.  This lighthouse is now known as Old Scituate Light. During the War of 1812, a British naval raiding party was deterred by the two daughters of the lighthouse keeper playing a fife and drum loudly. The girls and this incident became known as the “American Army of Two” or “Lighthouse Army of Two”.  An account of this act of defiance, and the subsequent honors given the girls, can be found on the New England Lighthouse Stories website.

Once inside, the harbor is jam-packed, and since we arrived on a beautiful Sunday afternoon, EVERYONE was out on a boat.  Quite a circus.  I think most visitors use the moorings and launch provided by the Scituate Yacht Club, which is the first major facility off the channel.  We found our very small but perfectly acceptable marina without much trouble, waited about ten minutes among very tightly moored small boats to pull alongside the fuel dock, then settled into our slip.  Very friendly folks, relaxed, easy, pleasant.  We were content.

A quick scrub of the boat and a nice walk ashore with the dogs gave us a bit of taste of the town.  It was hot, so we kept it quick.  Back on the boat we had a perfect Flybridge Evening while chatting with our neighbor, a local, who gave us the local scoop and seconded the recommendation we already had for dinner at the local pub right across the street rather than one of the more touristy spots towards town.  He was right!

We enjoyed a lively evening at the bar at the Satuit Tavern, chatting with the locals and being entertained by the happy and hardworking wait staff and bartenders.  Really fun, and good pub food and seafood!  Great choice.

We turned in early, since we needed to be under way by 0500 the next morning.

I was up at 3:40.  Coffee.  The hardest part was actually waking up the dogs!  They were out cold, and had zero interest in breakfast or a walk.  Eventually I coaxed them into motion.  It was pitch black.  We got everyone going, went for a half-hour walk, and by the time we got back to the boat to cast off, dawn was breaking.  It was perfectly still, and beautiful.  A great morning to start the long run across the Gulf of Maine to Boothbay, 110 miles to the north-north-east.