Along with a little bit of culture shock.

Our departure from Essex was as beautiful as the small town itself.  Serene, lovely, civilized.  A freezing cold 32 degrees. We wandered down the river, paused to admire the tranquil scenery and drink coffee while waiting for the railroad bridge, then continued past Old Saybrook and out into Long Island Sound.  Ready to do battle. Again.

The forecast was for stiff westerlies, backing from west to southwest and building during the day.  Our strategy was to favor a southerly course and try to get under a bit of lee from Long Island as we pushed west towards Port Jefferson, with some hope that we might make Port Washington.  It was about a fifty mile trip to Port Jeff, and once again the tide was against us but we hoped that would keep the sea state down a bit.

Within about half an hour of leaving the Connecticut River the wind was gusting 15 to 18 from the west northwest and the surface chop had built from one to two feet.  It was bumpy almost immediately.  We decided to push down the throttle a bit to try to get across the sound as quickly as possible.  Long-story-short, we had yet another nasty day on the water and the pups suffered.  The wind gradually cranked to the west southwest and increased, and the sea state was short, steep, nasty stuff that we crashed into no matter what speed we tried, or what angled we tried to the seas.  Not.Fun.At.All.

When Pepper threw up, Bruce had had enough.  I sat with the dogs huddled on the salon settee, and he threw the boat into high gear to try to get us out of it as soon as possible.  The entry to Port Jeff was a big relief as we turned side to the sea and wind and surfed in on the steep chop.  The harbor was blissfully calm.  We tucked into our slip at a mostly empty Danfords Marina.  The pups and I escaped to some green grass while Bruce de-salted the boat, which it needed very badly.

Remember that graceful little Connecticut town we left?  Well, we weren’t in Kansas anymore.  Port Jeff was a stark contrast to Essex as I wandered around the ferry terminal and was faced with more fudge, cotton candy, candied apples and ice cream than anyone needs in a lifetime.  The town was largely deserted on the early Friday afternoon.  Many storefronts were vacant, and at least right on the waterfront there was little sense of history, as most buildings were nondescript, poorly built and in various stages of disrepair.

And did I mentions “spas”?  I have never seen so many “spas” and “salons” in my life.  It seemed every other storefront was a “spa”, all offering some new service or technique that I, frankly, had never heard of.  What the heck is a “salt cave” anyway?  And do I really need an “organic sugar skin treatment”?   I was a little disappointed at the concept of likely spending three days there.

Why three days?  That weather thing, remember?  Although Saturday might be an OK travel day, we had to wait for a Saturday parts delivery for the heater (remember that heater saga?).  Another gale was looming on Sunday so it was a safe bet we wouldn’t be moving until Monday.  Oh well.  We would make the best of it.

In the end (except for the gale, more on that in a minute) we enjoyed our visit to Port Jeff.  It gave Bruce time to try (again) to get the heater going.  Danfords was fine, although it was expensive.  The website makes it look much more elegant than we will ever be, but don’t be fooled: it overreaches, substantially!

We found a decent supper at the bar at Ruvo’s, tucked off the main street.   There were several nice little parks to let the dogs do their dog thing, and we were even able to sneak in a little off-leash time.  Once we got off the main commercial streets of town we found pleasant residential neighborhoods, and the activity at the rather nice playground underscored a substantial family-friendly feel in the greater community.  It was kind of nice once you got beyond the commercial face of things.

On Sunday, during a break in the gale, I needed to get off the boat for some fresh air so I wandered around and got a second look at town.  Much to my delight I stumbled on a rather nice farmers’ market.  I re-stocked our organic greens and veggies supplies, got some locally made fermented sauerkraut, and even scored some nice fresh homemade pierogis for Bruce from a lovely Polish lady.  After that I found the Tiger Lily Cafe, an “alternative vegetarian eatery” that looked like it was a flashback to 1968 but had great my-kind-of-food.  Yum! 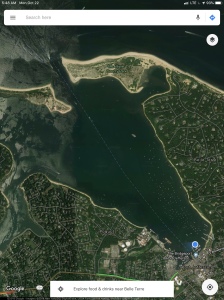 Ok, that gale I promised.  We have had a gale every two or three days on this trip so far.  It’s been astonishingly bad weather for trying to push west in Long Island Sound.  Who knew?  This one was supposed to blow up to 40 knots from overnight Saturday night until early evening Sunday.  And it did.

Although Port Jeff  is an entirely enclosed harbor with a small entrance, it has a long fetch running from the entrance at the northwest tip to the base of the harbor — where Danfords and the ferry pier are — in the southeast corner.
When a gale blows 25 to 40 out of the northwest, the harbor gets ugly.  In spite of the wave-baffled pier protecting Danfords, it was only marginally better than the moorings in the harbor.  When we got up in the morning the docks and the boat were bucking so badly it was unsafe to get off the boat to get the dogs ashore.  We had to wait until mid-morning, during a lull, to get ashore.

None of our photos show how bad it was.  Heavy spray came flying over the pier when the each wave hit.  Our boat was tied stern to the wind, and as the waves rolled through the baffles our swim platform was plunged under water.  The docks were bucking so badly it truly was unsafe to walk on them most of the day.

If we had been on a mooring, we would not have been able to get ashore at all.  One sailboat broke loose and got hung up on a powerboat as it drifted towards shore.  We watched them crash together for several hours until SeaTow finally came out to pull both  into the town piers.

Finally, by sunset, the wind began to die down.  We got the dogs off the boat for a decent walk and were treated to yet another culture shock moment.  Town sidewalks had become crowded with groups of people.  It was astonishing to see that EVERYONE, including groups of kids, families, couples, and individuals, old and young, were all walking around and EVERYONE had at least a cell phone in their hand and were hard at work texting away.  Literally EVERYONE.

Most were dressed in various shades of black and had their devices plugged into power supplies in their pockets.  Some had two phones while others had a phone and a tablet.  But EVERYONE had at least a phone out and was focused on it.  It was like a scene out of a bad movie.  Honestly.  Culture shock.  Twilight Zone.  Maybe someone will explain it to me sometime.

We took the dogs back to the boat and came ashore again half an hour later.  They were all gone.  I appears they were all swallowed up by the late afternoon Sunday ferry.  Wow.  I never got a picture.

We got a Pizza at The Pie of Port Jeff for supper.  It was OK, not great.  But at least we were off the boat and the gale was dying down.  Time for an early night, to get ready for what we hoped would be a long run the next day featuring our first trip down the East River and into New York Harbor.

2 thoughts on “Another Day, Another Gale”