As well as a little bit of R&R from delivery pace, and making new friends.

When we left Cape May through the Cape May Canal and out into Delaware Bay, our goal was Chesapeake City on the C&D canal.  We wanted to get there early to make sure we had a secure spot.  We were under way in the Cape May Canal before sunrise, and passed the Lewes-Cape May Ferry Terminal at the west end of the canal as the ferries were getting ready to start their runs.

Once out in the bay – the infamous Delaware Bay – a short chop kicked up pretty quickly. The forecast was for five to ten knots out of the east with one-foot seas.  What we found was 10-20 knots out of the northeast, with two-to-three foot seas.  That’s a big difference in conditions, especially when you are headed north up the bay with an incoming tide.  We had anticipated a relatively calm and easy ride.  What we got was lumpy-uncomfortableness for about two hours.  Enuf already!

After getting past the challenges of the Jersey Shore, the Delaware Bay offers a false sense of security and shelter.  The reality is that it is a very, very large body of water with strong tides and a wide, wide open entrance to the great Atlantic ocean.  The upshot is lots of fetch from almost any direction, strong currents, and sometimes an ocean swell.  Conditions can get very nasty.   And the water was brown.  No more clear blue of the open ocean.  We probably won’t see that again until somewhere in Florida.

We had counted on light winds on our quarter with a fair current, which would have translated into a benign ride.  What we found as we entered the bay was a surface chopped kicked up by the stiff northeasterly against the incoming tide.  It was, shall we say, uncomfortable.  About half a dozen boats left the canal a mile or so ahead of us, all headed the same way.  They were all running at slow trawler or sailboat speed, and getting doused with spray.  We put some power on, increased our speed to our-new-best-friend 15 knots, and off we went.  Yes, we had lots of spray over the deck, but we were warm and dry in our pilot house, and we were making good time.

Within a couple of hours, the bay narrowed and we felt the shelter of the Jersey shoreline on our starboard bow.  Things calmed down dramatically and the ride turned into a pleasant trip, although heavily overcast with rain threatening.  From there, it was an easy jump to the entrance of the C&D Canal, a 14-mile man-made waterway that connects the Delaware Bay to the Chesapeake Bay.  If we had continued straight north, we would run up the Delaware River to Philadelphia.  But that’s another trip.

The concept for a waterway connecting the Delaware and the Chesapeake was first conceived in the mid-17th century, but no real steps were taken until the late 18th Century when prominent Philadelphians, including Benjamin Franklin, persued the concept.  Finally, in the 1820s construction was actually undertaken, the the canal opened officially in 1829.  It was the most expensive canal projects of its time.

We made our way to Chesapeake City, near the western end of the canal.  Our plan had been to spend the night there, explore the town, and stay tucked in for the nor’easter that was expected overnight Friday into Saturday.  Unfortunately, we didn’t feel comfortable with the facilities, given the forecast conditions, so we scrambled for a new plan and set our sights on Rock Hall, Maryland.  In a wink of an eye, this changed a 60-mile day into a 100- mile day.  Fortunately, we had gotten an early start so we could complete the entire trip in daylight.  Fair current in both the Delaware and Chesapeake also helped.

By the time we left the C&D Canal and entered the Chesapeake the wind and sea had gone completely calm.  The light was gray and flat.  It was the proverbial calm-before-the-storm.  We had an very easy ride to Rock Hall, blissfully flat after all the rough weather we have had.  But it had been a long day on the water — a full 100 miles — so we were glad to arrive in Rock Hall, taking the long route around the shoal that extends well south of the entrance, then back up and in between the jetties to the well-protected harbor.

We called Rock Hall Landing Marina, and the very friendly and accommodating dock master waved us alongside.  Easy-in and done.  Rain was threatening, and even spitting a bit, but we decided we all needed to stretch our legs.  West Marine was about a mile away, and since I have been grousing about the need for larger fenders, we decided to head to the store to see what they had.  Predictably, they didn’t have exactly what we wanted, but the rain held off and we got that good walk we needed.  Our pups were happy to sniff and pee along the way, and we got a full look at the entire length of the two-block town.

Dinner was the next immediate task. When in Rome…get crab cakes!  We were right next door to the [somewhat] famous Watermans Crab House, so we wasted no time.  It was a cold, damp night, and the bar was warm and comforting.  During the evening our cranky bartender, who had been there more than 20 years, gradually warmed up to us and by the time we asked for our check she seemed to actually think we were pretty funny.  We enjoyed some really good lump crab cakes: a perfect way to celebrate our arrival in the Chesapeake Bay.  By the time we finished and headed back to the boat it was windy and raining.

The storm rolled through overnight.  We barely felt a thing, as we were tucked in under a northeast shore and everything blew right over our heads.  We had picked a very good spot.  Meanwhile, sections of the Jersey Shore, were we had spent the previous two nights, were under water from the powerful easterly winds.  Paying attention to the weather forecasts can make a big difference in your day.

We had a very pleasant, simple stay in Rock Hall.  We stayed put on Saturday, as the storm was still blowing and we wanted to poke around town a bit.  We had a late, leisurely morning, taking advantage of the rainy, windy conditions to splurge on a nice breakfast on board.  Bruce got a tasty peppers-and-cheddar omelette, made with the last of our farm fresh eggs from Jamestown, and avocado toast, and I got a big pile of sautéed organic greens from the Port Jeff farmers market with one of those farm fresh eggs poached.  To each his/her own!  We strive to please.

Before we had finished cleaning up, and while I was still in my bathrobe (did I say it was a late, leisurely morning?) there was a loud knock on the hull and two smiling strangers were waving in our salon windows.  Facebook friends, from the Trawler Living and Cruising group!  What fun!  Will and Willy climbed aboard and we all had a fun, fiesty gam with coffee in the salon.  We shared tales of trawlers and projects and cruising, and life around Rock Hall.  A perfect rainy-day morning all-around.  Best of all, they brought Gifts!  When is chocolate not an appropriate welcome?! And local pens, so we could write them a thank you  card (all future guests, take note.)

Well fed, we went off to explore the full two-block town.  It didn’t take long.  Originally known as Rock Hall Crossroads, the town had humble beginnings both as a tobacco port and as a major fishing and crabbing center. It has since morphed into a recreation destination, with a lot of boating, birding, RVing, and waterfowl hunting.  Nearby Eastern Neck Island is a Federal Wildlife Refuge.  Best of all, it has maintained its small-town essence. The main drag is all of two blocks long.

Bruce took advantage of the layday to tackle some projects.  The windlass relay was showing signs of corrosion, thanks to constant dousing with salt water on this trip.  He removed the control relay, cleaned the corrosion, removed factory installed plastic coating, then reinstalled the relay and greased terminals with silicone grease.  That done, he moved some ballast lead that was impacting our trim now that we are loaded for a long cruise.  That being a hard work day, we went off in search of more crab cakes to reward his efforts.

The next morning we took the dogs on another hike around town, ending at the Java Rock Coffee House for a mid-morning espresso, which morphed quickly and predictably into espresso with a reuben sandwich and a brownie – both of which were excellent.  Pepper and Mattie approved of the reuben.  Mattie even snarfed up the bits of sauerkraut, which was entertaining.

Fed and walked, it was time to move on.  We cast off from the hospitable Rock Hall Landing Marina, and headed out on the bay towards Annapolis, where we would pick up the FINAL heater parts — we hoped.  Once again, it was supposed to be 10 knots, but we were seeing a steady 15 – 20, with choppy seas.  So once again, we put the throttle down.  This speed travel is getting old.  We long for our eight-knot days.  Someday, someday.

Our arrival at the approaches to Annapolis demonstrated why Annapolis is (in our view) the second world capital of sailing (Newport, RI being the first).  After cruising beneath the twin spans of the Bay Bridge, spinnakers covered the bay as several regattas were under way, and spectator boats buzzed around the racing fleets.  Cruising sailors criss-crossed the outer harbor.  We looked forward to spending a few days at one of our favorite seaside cities. 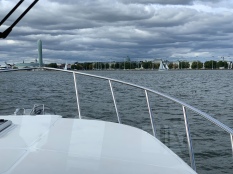 The Annapolis waterfront and the Naval Academy.

Because we still had no diesel heat (only electric), we once again looked for dockside accommodations so we could plug in.  If you’re going to be in Annapolis, why not be in the center of things, right on Ego Alley?  We called the harbormaster and made our way in to a slip in the center of town.  This would be fun!

One thought on “The Chesapeake is for Crabs: Rock Hall”