After the chaos of Fort Lauderdale, we were ready for some down time. Delray was the next stop on the road north.

It was a leisurely morning at Bahia Mar before getting under way. The dogs got to explore the facility one more time – thankful for the little park-like area with nice paths, tall trees with lots of shade, and excellent green stuff to sniff. Our priorities are simple, but sometimes hard to satisfy. One last oogle at the mega yachts, and a visit to the office where the cookies were plentiful and the girls showered Pepper and Mattie with love and treats. Very feel-good.

We cast off without incident and headed north up the waterway, cruising beneath the shadows of the yachts on the outer floats at Bahia Mar.

It was very windy. There were piles of bridges to go through so we repeated the drill of figuring out where we needed openings, where heights were close, how to time the distances, and trying to enjoy the ride and the scenery at the same time. It was a hectic, slow ride, but pretty, with fantastical real estate the entire way.

We had a reservation at at the Delray Beach City Marina. It had good reviews as a small, friendly, local-type spot, a nice contrast to the Bahia Mar/Fort Lauderdale. Identifying our slip was a little confusing, but we figured it out then made our approach, which was complicated by a strong current and even stronger cross-wind. It took three shots, but we eventually got her backed in safely. And oh yes, we had an audience. Oh joy.

The “marina” is just a row of slips backed up to a park-like strip along a residential road. It is very low-key, friendly and quiet. The pups had plenty of real estate right out the back door. We could walk one block to the main drag, Atlantic Boulevard, where there were countless restaurants, lots of al fresco options, and shopping galore. And totally dog-friendly, with bowls of cookies and fresh water at almost every shop. It was a very pleasant place to stop. We ended up enjoying the closest restaurant, Deck 84, twice during our stay. The bartenders were nice and the food was good. 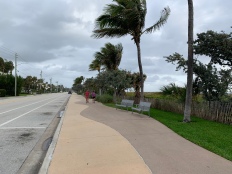 Delray Beach has a wonderful multi-use recreation path that runs along the beach.

In addition to lengthy walks up and down the Main Street, I enjoyed several runs down to the beach and up and down the multi-use path along the waterfront. It was very attractive, and heavily used by the locals and snow birds. Thankfully, in spite of the record heat, we had some cloudy weather that made it palatable. 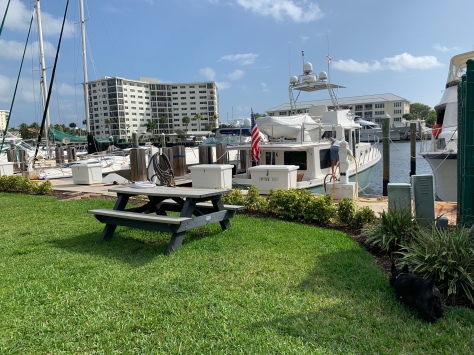 Esmeralde was happy tucked in to her slip, with pleasant landscaping nearby.

Bruce made good use of our visit to get some projects done on the boat. The windows got thoroughly cleaned with new window cleaner and polish he had found at National Marine Suppliers. The stuff is called Aquatech, and it is (apparently!) better than sliced bread. Highly recommended. He had also bought new hose, made in France, that he had been looking for for some time, and it had to be put together so that was more fun. Finally, we had a mystery scrape in the gel coat near the transom that needed to be repaired, and he got that cleaned up beautifully: there was no trace of anything when he was finished.

Our stay in Delray was punctuated by some boisterous weather. A couple of fronts came through bringing torrential rain, thunder, lightning and high winds. While we were there, the highest temps on record were joined by the wettest February on record. Such fun.

Our Facebook activity generated fun also. We had a visit from the crew of the Selene 56 Spyhop, and had a chance to visit them on their boat. It’s always a treat to meet fellow cruisers, and especially nice to see their boats. The Selene was lovely.

There was a Publix a mile away, which made for a pretty good walk in the heat. We made a couple of trips during our stay, because we don’t plan well and never know what we will need. It keeps us busy.

In the end, Delray was a pleasant stay for us. We got some things accomplished, found a new town we enjoyed, and got some R&R. We were only disappointed that the little marina we liked is going to be redone — we don’t think it will be ready for more than a year, and we don’t know what the facility will be like. Sometimes improvement is good, sometimes not-so-much. We will find out.