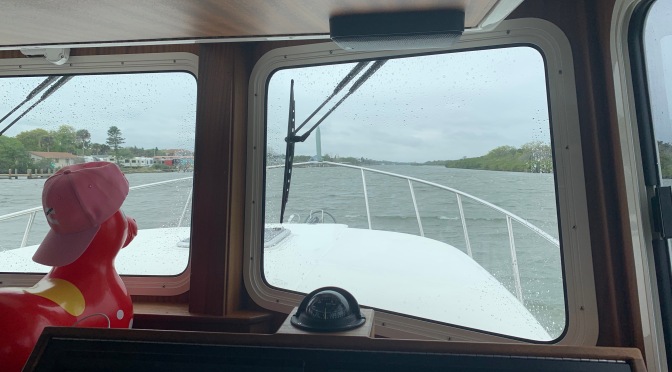 We might have lingered in Vero Beach (there is a reason it’s called “Velcro Beach”), but the forecast was showing three days of gray rainy stuff, followed by a full-on gale, so we decided to make tracks while we could. Vero to Cocoa to Daytona to St. Augustine.

We did some math while we were hanging in Vero, looking at the weather for the next few days and trying to decide what to do. We ran some calculations on what the trip all the way back up to Rhode Island might look like. Our general goal, which we had set sort of arbitrarily in the fall, was to be home by late May. That gave us ten weeks to cover roughly 1500 nautical miles. At about 150 miles each week, or three reasonable 50-mile days per week, it offered lots of flexibility for running slow when we wished, taking a few short days, and lingering in ports we enjoyed. All perfectly doable.

It also meant that when good travel days presented themselves, we might as well run. Which is what we did, leaving Vero a day earlier than we originally intended. We got a late start (math calculations take time!), but it was calm. Skies were overcast and drizzle came and went. A little gray weather doesn’t bother us, especially after all the oppressively hot sun we had been experiencing since mid-January.

Vero to Cocoa was 48 miles. The early miles were meandering along the Indian River, surrounded by impressive real estate. It had been spectacularly beautiful on our first run through on a sunny day in December; today, the gray skies toned everything way down, but it was not unpleasant.

We got a late start, and even though it was a Saturday there were few boats on the waterway, so we ran fast after the density thinned out. Navigating was easy and we enjoyed the low-stress ride, except for the countless derelict boats. Florida definitely has a problem.

Our route took us past Sebastian, Palm Bay, Melbourne, and Meritt Island to the village of Cocoa, and the Cocoa Village Marina. We raced the last few miles, as we could see squally weather approaching fast. We pulled into our slip as the wind kicked up and big fat raindrops began to spit. In the nick of time…

At Cocoa, we were almost due west of the Cape Canaveral launch complex. Next time we come through, we would love to visit that whole operation, and hopefully see a launch of some sort.

Last time we were here, Bruce was up to his eyebrows in exhaust elbow repair and replacement, so he had almost no recollection of the place. We took the pups for a wander, then headed over to Ryan’s Pub, where St. Patrick’s Day was getting into full swing a day early. The crowd was colorful and the pizza was great.

St. Patrick’s Day! And it felt a lot like St. Patrick’s Day at home! It was gray and rainy. We timed our dog-walk poorly, and were soaked by a torrential downpour that began shortly after we left the boat. And it was cold: I was in long pants for just the second time since our trip south in the fall. The dogs got short-changed: we truncated the walk and returned quickly to the boat. We had a long day ahead, so we were off the dock and under way by 9:00.

It was Sunday, but there wasn’t another boat in sight for miles and miles. Not a good recreational boating day, but perfectly acceptable for making tracks. There was plenty of rain, so if we had stayed in port we would probably have simply hung out on the boat. Might as well make progress. Isn’t that what a nice warm, dry, comfy pilot house is for?

In spite of the weather, we had a scenic ride. Once past Titusville, we left the Indian River and crossed through the Haulover Canal, which was actually fairly crowded with folks making good use of Sunday out fishing in the Merritt Island National Wildlife Refuge.

The Indian River had been fairly protected from the weather, but the Mosquito Lagoon was kicked up by the cold and gusty north wind. We were all alone up until New Smyrna Beach and the Ponce de Leon Inlet, where we joined the Halifax River, and proceeded the final 10 miles to Daytona and the sprawling Halifax Harbor Marina.

The weather was still gray, cold, windy and wet, so after another relatively short walk ashore with the pups, we retreated to the boat for a simple shrimp scampi dinner and an early night.

After an early night, we were up for an early start, but since sunrise wasn’t until almost 7:30, we had a dark, chilly, damp dawn walk with the pups. Although there are things to do in Daytona, the weather was not conducive to exploring and we were in travel mode. We were off the dock at about 8:00, into a gray, blustery, drizzly Halifax River. The current was running strong with us, but against the wind, so we had a wet and bumpy ride for much of the morning.

Things weren’t very interesting until we got to Ormond Beach where we passed through the Tomoka State Aquatic Preserve and Tomoka State Park. This section of the Halifax River is lovely, and continues as it transitions into the Matanzas River where you pass Gamble Rogers Memorial State Park and the Betty Steflikk Memorial Preserve. Further north, near Flagler, is Silver Lake Park. There are some briefly congested areas, but for the most part it is a pleasant ride through nature preserve.

The Washington Oaks Gardens State Park was lovely, and as we passed, the sun broke through. It was Sunday, the start of school vacation week, and lots of families were enjoying the park waterfront. It was still very windy out of the north, but the windblown whitecaps and green water were beautiful. It was fun waving to the kids and sightseers.

The final stretch into St. Augustine was very windy, but fortunately the sun was out. We managed to go through the notorious, tricky and shallow Matanzas Inlet, around the Fort Matanzas National Monument, at dead low, which was -.5 foot. The buoys and the chart conflicted, but we found deep water and made it through safely.

We were assigned a slip on the north side of the St. Augustine Municipal Marina, right under the Ponce de Leon bridge and fully exposed to the north. With a northerly gale in the forecast, we weren’t thrilled with the location and asked if we could move to something more peaceful. The marina manager was accommodating, and we pulled in our lines and moved to a southern pier. The new location was under reconstruction, but much calmer and more pleasant.

We were happy to get off the boat and give the dogs some decent exercise. St. Augustine is an excellent walk-around town. It was very crowded with kids doing school vacation week stuff, but we were OK with that. Finally, we retreated to the boat for a relaxing cocktail on board, and waited for Bruce’s friends John and Kathy to meet us for dinner. They came with Kathy’s two grandkids, who were cute as a button, so Al’s Pizza was the right choice. We were surprised: it was actually pretty good. A fun evening.

A gale was forecast for the next day, so we settled in and planned to enjoy a few days in St. Augustine.