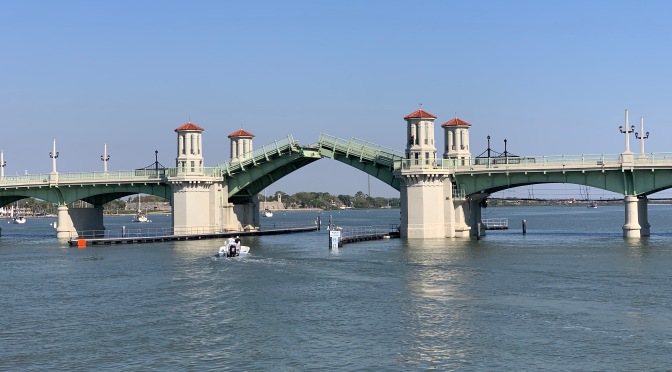 Leaving our port-in-the-storm St. Augustine, we were in for a beautiful stretch of weather to usher us ever-further up the coast. We slipped quickly into go-mode, and made tracks.

I woke early to a brilliant moon in a clear sky. The stage was set for a great few days of running north. We had had some fun in St. Augustine but we were ready to roll. Thanks to the Tini Martini Bar and a late night with our pals at The Floridian, we did not get an early start, but it didn’t matter, since our next stop, Jacksonville Beach, was just 27 miles up the waterway.

The air was crisp, dry and cool, the sunshine was bright and the breeze was blustery out of the northwest. Before we got anywhere, Sam and Jerry from the N37 arrived alongside with donuts from The Donut Experiment. Of course! Never leave port without donuts!

By the time we got the dogs walked and were ready to cast off our lines, it was shortly after 10:00. We had to wait for a 10:30 bridge opening, and as we waited, we watched two boats get into trouble leaving the marina, thanks to the strong full-moon current racing through the marina. One somehow got pegged crosswise in her slip and was held there by the current, unable to back out. The other also mis-judged the current and was swept hard into the opposite slips and piles, hitting with a loud CRUNCH and quite a lot of yelling. We saw her later in the day in Jacksonville Beach, and the damage near her waterline was significant. Ugh.

Sobered by the misfortune of others, we pulled out fast and firm and stayed out of trouble, and had just enough time to catch our breath before the bridge opened and we proceeded on our way.

The ride under The Bridge of Lions, out the Matanzas River and up into the Tolomato River was lovely. We were on the flybridge and enjoyed the beautiful scenery of marshland and nature preserve for miles and miles. We meandered around the shallows and marshes of the Stokes Landing Conservation Area, the Guana Tolomato Matanzas National Estuarine Research Reserve, Deep Creek State Forest, Guana River Wildlife Management Area and the Nocatee Preserve.

It wasn’t until we approached Jacksonville Beach that civilization began to reappear. It had been a lovely ride, not to long, and we pulled into the Palm Cove Marina quickly and easily.

It was early enough in the afternoon to make stretch our legs with a walk to the Publix market and liquor store. It was only about half a mile away, but we took our lives into our hands crossing the busy strip of Route 90. Yikes. On the return trip, lugging grocery bags, we almost called an Uber just so we wouldn’t get killed crossing the road.

We also tracked down a diver to scrub our bottom. We had been cleaned in Key West about a month earlier, but we were noticing that the boat wasn’t holding her pace and we didn’t want to drag slime up the entire eastern seaboard. A guy named Ryan, recommended by the marina, promised to be at the boat by 9:00 am, after low tide gave him some room to move.

In addition to groceries, liquor and the diver, the best thing about Palm Cove Marina is the on-site restaurant Marker32. We had enjoyed an excellent evening there on our way south, and it did not disappoint. Roast duck breast for Bruce, and a crab cake for me. Excellent food and excellent service. We sat at the bar, ate well, and enjoyed good company. Back at the boat, we turned in early to recover from our night in St. Augustine.