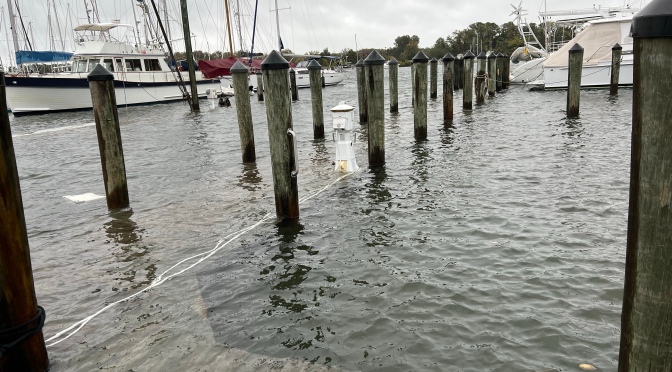 We enjoyed an extended stay at Solomon’s thanks to — can you guess? — the weather. Two lovely days, one one day of gale conditions and historic flooding. We picked a good spot to ride it out.

We left Annapolis behind as the clouds cleared out, the sun began to shine brightly and a stiff northwest breeze pushed us down the bay. Small Craft Advisories were up. It was blustery — 15 – 25 knots — but as it was behind us, we were pretty comfortable. The current was erratic, first against us, then with us, then against us. The sea state got a little lumpy when it turned against us off Jefferson Island at the entrance to Eastern Bay, so we pushed up our speed for twenty minutes or so to get beyond it, and life became happy again.

For the final hour approach into Solomons, the wind dropped off and we had a lovely sunny, calm fall ride around the looming LNG terminal at Cove Point, and up into Back Creek. We had made a reservation at Zahniser’s Yachting Center because they are now a Safe Harbor Marina and we could use up some of our 12 free nights there. We were thinking it would be two nights, but alas, it ended up being four nights, thanks to another gale.

The extra time made for a delightful stay. We had a number of friends in the area to catch up with, plenty of boat projects, and its a delightful area to spend time.

We had hoped to catch up with a Trawler Life friend and moderator for dinner the first night, but he had to cancel. Plan B was just as good: we finally met Facebook celebrities Stacey and Dave, off Stinkpot, in person. We enjoyed Limoncello Martinis aboard Esmeralde, then went off for dinner at Stoney’s Kingfishers where we sat outside around a gas fire and ate fresh seafood. It was a memorable evening.

The next morning we played our customary game of “Do we stay or do we go?”. It was a good travel day, but the next day would be terrible, so we wanted to hang in a secure spot where we had some hope of entertaining ourselves and keeping the puppies busy. After consulting with Tim and Diane, who were aboard their Kadey Krogen Acadia across the harbor, we decided to stay put for the day. It became a day of waxing for Bruce, and for me, laundry, boat chores and walking the pups. It was lovely fall weather and we enjoyed ourselves.

In the evening we headed out for some dinner with no idea where we would end up. A local working on his boat in the boatyard recommended The CD Cafe, right around the corner from Zahniser’s, as the best food in Solomons. We enjoyed an excellent meal at this unassuming spot.

Day #2 presented us with not only the promised easterly gale, but also historic high tides generated by the powerful winds driving water up the bay. The pups decided to get me up at 0430, so I got to watch the waters rise to even with the level of the fixed docks by 0700, and about 6” over the docks by high tide at 0900.

We elected to stay safely on board while the docks were submerged. Bruce decided to polish our countertops while I tried to keep the puppies out of his way. It wasn’t until 3:00 pm that the water levels had dropped enough for us to leave the boat without wading or swimming. We took the crazed puppies for desperately needed exercise — which we needed also. We had a soggy walk into town, where Bruce was crushed to find that Lotus Kitchen was closed. He would have to wait at least another day for one of Kim’s Key Lime Pies.

We scurried back to the boat to make sure we could get aboard before the water submerged the docks again. We had just enough time to call Jerry’s Pizza for a delivery for dinner. At that point, the water continued to rise and we were aboard for the night. Thank goodness the pups are content to use their AstroTurf.

The forecast for Day #3 was deceptive. Most of the mid-bay was supposed to see southwest winds 10 – 15 with gusts to 20. Ten to 15 knots might not be too bad, although we were headed into it so my antennae went up. A check of live conditions around the area showed that it was still blowing 20 and gusting to 30 at 0800. I knew that even if it were to relax to 10 – 15, conditions would be, um, sporty.

So as we watched a dozen or so boats leave the harbor to head south, we elected to sit it out another day. Based on reports later on from those who left, we made the right call. Most bailed out at whatever creek was available to anchor in as soon as they could. We, on the other hand, enjoyed another delightful day puttering around Solomons. And Bruce even got his famous key lime pie.

The boat got even more wax. Tim and Diane gave me a lift to the Giant supermarket, which was especially welcome since I had not been to a grocery store since leaving home almost three weeks before. Our freezer was in good shape, but we needed fresh food! We then enjoyed a fun supper at the CD Cafe with Tim and Diane, where we talked boats, boaters and plans for the winter. They are headed south as well.

The next day we were all set to leave. The forecast was good, but the conditions as we got under way were even better than we hoped. It was shaping up to be an exceptional sunny, clear, calm day on the Chesapeake.