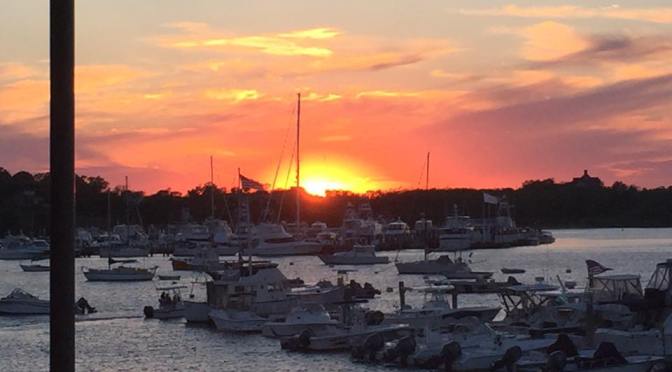 We didn’t rock much of anything, but the Block was rock’n on the 4th of July weekend.

We wanted to get settled and enjoy a few peaceful days before the mob showed up, so we motored over on Tuesday and got settled in.  All the town moorings were occupied already (by boats that had been left there the previous week, we later learned, to secure a spot for the 4th.)  Fortunately we were able to snug up on a private club mooring we have access to on the western shore of the harbor, which is very pleasant.  We made it to The Oar several times for some drinks, dinner and beautiful sunsets over the Pond, and enjoyed rambling around the island with the dogs.  It was very relaxing, but by Friday, the pace started to pick up.

We were settling in to relax and watch arrivals on Friday afternoon – a great spectator sport – when we suddenly found ourselves surrounded by a heavy, thick, persistent gas spill.  It was coming from directly upwind of us: Champlins Marina.  No one seemed to be taking notice, so we turned on the radio to mention it to the Harbor Master.  Just as we finished filling him in, the radio buzzed to life with folks calling in about a sportfish on fire in the main channel.  All hands headed off that way.

We could see black and white smoke billowing out of the cockpit.  Samaritans got the family off the boat.  SeaTow, the Harbor Master and Harbor Patrol raced to the scene.  The volunteer fire department high-tailed it by truck to the Coast Guard facility at the entrance.  The Coast Guard never showed up.  Somehow the boat got pushed/towed to the Coast Guard dock, where the firefighters were able to run a hose and put out the fire.  No one was hurt, nothing exploded.  A holiday weekend was definitely wrecked for one family, and the boat was towed home.  Hope they had a good insurance policy.

After that scene quieted down, focus turned back to the gas spill.  By then, it had mostly subsided and to our knowledge no one ever found the source.

Mother Nature then decided to up the ante by sending a nice cold front our way, preceded by a rollicking rain, wind, thunder and lightning show.  This hit at about 9:00 pm.  the dogs were not at all happy about it.

The harbor was full.  The rough (unofficial and preliminary) estimate by the waterfront folks was about 2,000 boats.  Champlins was a zoo, the Boat Basin was fairly civilized, and Paynes was buzzing.  The breakfast sandwiches at Rebecca’s Dockside at Paynes were yummy, and Mattie loved the obligatory Killer Donut she demanded.  Other than The Oar, we stayed out of the restaurants but did consume a few Mudslides at the various watering holes.  It wouldn’t have been Fourth of July in Block Island without them!

With a marginal forecast for Tuesday, we decided to shoot home on Monday.  A nice ride, a good end to the summer inaugural weekend.