We started the day at a KOA Campground in Manchester, south of Mendocino.  This is a spectacular part of the Pacific Coast Highway.  Small funky villages, long expanses of incredible natural beauty, and little to no commercial degradation.  Nothing fancy, either.  Simple life stuff.

It was so soggy I don’t think the dogs got a morning walk.  A quick squirt and into the truck, with a forlorn hope for something a bit drier later on.  Disappointing, because the campground, surrounding area and nearby State Park should have been a dog’s delight.  The beach at the base of the road, which I had visited during a run the evening before in a steady gray drizzle, was stunning in spite of the weather.  It would have been close to paradise on a sunny day. 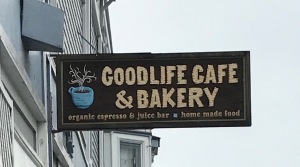 Our day brightened, however, as we took a detour off Route 1 to poke our noses into Mendocino.  A break in the rain and a glimpse of a bakery advertising espresso, cappuccino and fresh baked goods caught our attention.  Thankfully our Bambi is small enough (and cute enough) to stash on most any small town street, so we pulled the rig along a curb and piled out. 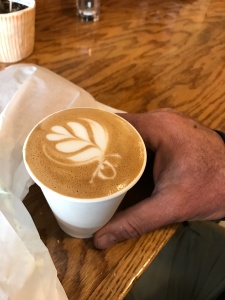 Good call.  We if you ever get a chance to visit Mendocino, plan to spend some time at The Good Life Bakery and Cafe.  I’d like to list all the good stuff you can get here, but there’s really no point.  It’s all great: just dive in! The grocery/hardware/pharmacy store is nearby and well stocked will all kinds of wonderful treats and necessities, so we bought as much as our little fridge and cooler could handle before saying goodbye to a new favorite spot.

North of Mendocino there are virtually countless beautiful places to pause at or explore.  Because of the pouring rain we found ourselves bypassing a seemingly endless array of bucket list-type stopovers.  Painful at times, but it is what it is.

Normally we would have stayed on Route 1 until it eventually veered away from the coast and re-joined Route 101 at Leggett, but it was washed out and closed for repairs so we had to take Route 20 across at Fort Bragg.  This actually was a beautiful alternative.  Route 20 is a fun, winding, beautiful drive through Jackson State Forrest.  We enjoyed it immensely — until, that is, we pulled off at a picnic spot for a break only to discover that poor Pepper had been less-than-thrilled with the hairpin curves and mountainous inclines and descents and had lost his breakfast onto the floor in the back seat.  Our poor little backseat troopers!

After joining Route 101 north in Willits, we wound our way through pretty roads but rather poverty-struck towns until we exited onto the original Route 101 at the “Avenue of the Giants.”  This is the old route through impressive old growth stands of redwoods. There are three trees that you could actually drive through — until one month before we got there when heavy rains and storms toppled the famous Pioneer Cabin Tree.

Back on Route 101 again, driving became challenging.  There was traffic, roadwork, slides, and of course driving rain.  Vistas were still impressive and we enjoyed the constantly unfolding changes in scenery as we wound our way back along the coast, but in the mountains the temperatures dropped, snow appeared on the roadsides and the road surface became slick.  The hairpin turned, sharp drop-offs, steep climbs and fast descents took on new meaning.  The drive became hard work.

One by one, we abandoned plans to stop at the various state or county parks we had identified as possible campsites for the night.  Some turned out to be closed on account of all the rain over the last month, and others simply no longer seemed appealing in the drenching conditions.  We eventually settled on yet another KOA, grateful that we could count on a happy reception, a well-drained campsite with hookups, and laundry to help dry things out.  Pulling in just north of Crescent City was a great relief.