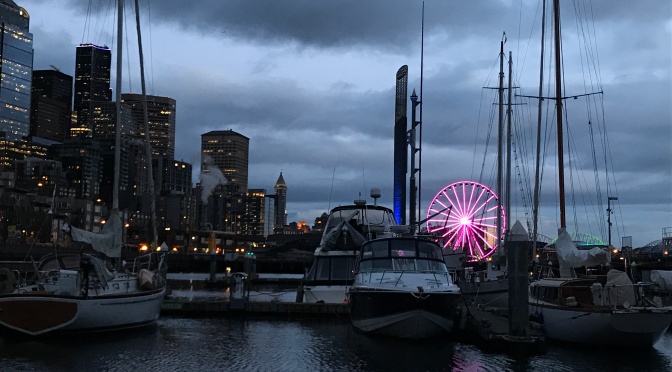 As we hauled up our anchor after a pleasant layover at McMiken Island State Park in South Puget Sound, we could smell the end of our Pacific Northwest cruise, and the finale to our shakedown of Esmeralde.  In order to deliver the boat back to the factory in time for them to hit our punch list and prepare the boat for her truck-ride across the country, we had to think about getting her back to LaConner.  We figured we had two more nights. 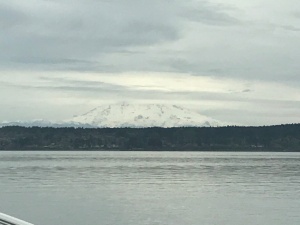 We left McMicken the way we had arrived, around Anderson Island.  As we passed through the channel between Anderson and McNeil Islands, past Eagle Island State Park, majestic Rainier rose up through the overcast in the distance, her peak lopped off by the dense cloud cover.

There were a variety of small harbors, towns and state parks we could pop in to, but for some reason I don’t completely understand, we had an urge to visit Seattle one last time.  Maybe it was the croissants?  Or the tulips?  No matter: Bell Harbor had room for us, so we motored in and tied up happily alongside at the familiar scene. 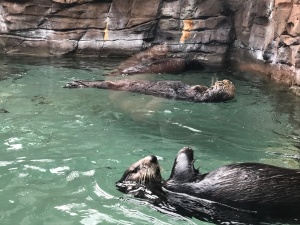 We had just enough time in the afternoon to visit the aquarium, which was good fun.  We also learned NEVER to visit Pike’s Place on a Saturday afternoon: a mad-house.  It began to rain, so we had a quiet evening aboard.  In the morning we made one last trip to Le Panier for an indulgent breakfast, picked up another bunch of tulips, then shoved off to what was to be the last night of our cruise.

As we left Seattle it was a quiet Sunday morning.  The breeze picked up gradually as we headed north, and by the time we paused at the south tip of Whidbey Island, where we hoped to see grey whales feeding, it was brisk and cold.  Sadly, no whales, so we proceeded north along the eastern shore of Whidbey and headed for Langley.  I was a little concerned about the stiff wind and exposure to the northwest, but we figured we would deal with it when we got there.  We could always go on to Coupeville or Oak Harbor. 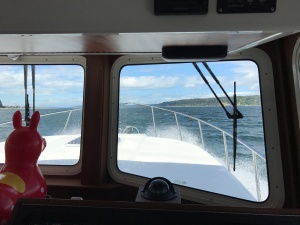 The last few miles into langley gave us a windblown ride, with lots of salt water over the bow and in our face.  As we approached the town, our starboard windshield wiper gave up: as before, perfectly imperfect timing.

Sure enough, the wind was howling as we contemplated our arrival.  We raised the harbormaster on the VHF, and after waiting for another boat to go into the small basin ahead of us, we followed instruction and picked our way into the very tight and very exposed berth.  This was one of those “keep your speed on and don’t hesitate” situations, with the wind blowing us broadside off the dock, with no room to spare.  I held my breath and applied all my new and imperfect skills as best I could, grateful for Bruce and the two hands on the dock who were there to handle our lines and make certain we were secured without incident.  Whew. 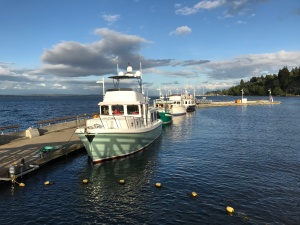 What a lovely spot.  Our berth had beautiful unspoiled views, and the small town up the hill was charming. 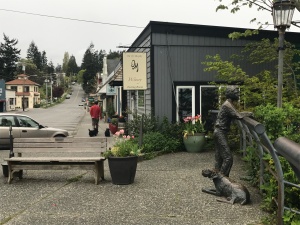 I’m sorry we didn’t have more time to spend there, as it begged to be explored just a little more than we had leisure for.  And yes, the wind dropped off in the evening, the sunshine emerged right on cue, and we enjoyed one last Flybridge Evening of the cruise.  In the morning we would return to LaConner. 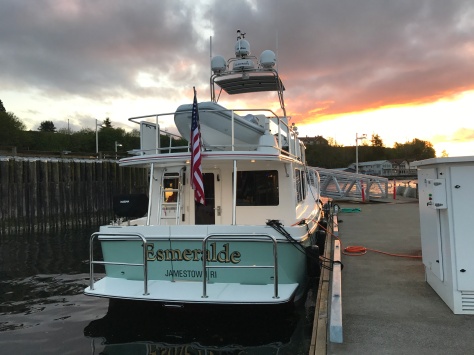 One thought on “Shakedown – Part 10 – The Last Hurrah”