It was The Trip From Hell, but it’s over.  She’s home!  After a planned 10-day trip across the country morphed slowly and painfully into a 25-day odyssey, Esmeralde finally arrived at New England Boatworks yesterday, June 8 at about 12:30 on a beautiful sunny afternoon. 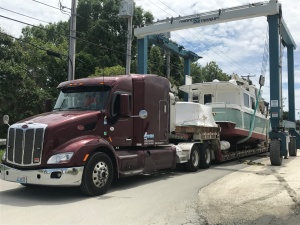 The trip itself is worthy of it’s own very long post, but I’ll leave that for another time.  At the moment, we are simply happy to have the boat back in her home waters, floating properly in the Atlantic for the first time.  She was rather filthy when she showed up, with a gazillion bugs smushed all over her and a dense layer of road grime.  Inside, she was, oddly, there was a layer of dust on every surface.  Otherwise she was in excellent condition and everything that was packed inside her appears to have made the trip safely.

We need to give a huge shout-out to our driver, Alan, who was a trooper throughout this painful delivery.  He was patient, kind, diligent, and skilled.  We couldn’t have asked for anything more.  We will fill you in on the details of this trip later.  It was kind of like tumbling into the twilight zone of errors and incompetence (not from Alan).  He persevered, and got our boat to us safely in the end.  We owe him a huge dose of gratitude.

The travel lift crew was at lunch when the truck pulled in, but within about fifteen minutes they were all over the project.  The travel lift had her off the trailer and in the water less than an hour after she arrived.  Quick and efficient: thank you New England Boatworks.

We spent the afternoon removing all the protective films and tape and carpet and padding, and unpacking stuff that was stored below.  And washing.  Most of the road gunk came off with elbow grease and a lot of soap and water, but we will have to spend some time with goo-gone to get rid of remaining adhesive, and she’ll need wax, too, since the soap and scrubbing will have removed the wax she had.

It will be a long weekend of putting everything together and getting basic gear on board, but by early next week she should be in good shape and almost ready to enjoy her first summer of cruising.