The boat finally arrived at New England Boatworks on Thursday, June 8 at about 12:30 in the afternoon.  Thanks to the quick response by our driver, Alan, and the NEB travel lift crew, she was floating by 1:20.  After so many delays getting her here, including a 10-day stint at a truck stop in Maryland waiting for permits, this quick splash was a welcome relief.  She was very dirty from all the road filth, but aside from that and a few superficial scrapes from tree branches and other flying debris, she was in great shape.

It was time for the work to begin to put her back together.  In spite of the fact that we had been cruising for a month in the PNW before the truck ride east, we had a lot to do.  First up: a major bath both inside and out, which started on Thursday immediately after launching.  Bruce used Roll-Off on the superstructure because it was so very grimy.  Unfortunately this removes wax, but it was the only real way to get it clean.

On Friday Bruce started removing all the protective padding and tape, and cleaned the sealant out of the holes for the flybridge fasteners.  The the yard picked the flybridge off the pallet with a crane and lowered it onto the pilot house.  Bruce got it bolted in place.

That, as it turned out, was the easy part.  Next up was re-connecting all the mechanical systems and electronics.  This began on Saturday, and didn’t exactly go as planned.

We spent Friday night on board: our first night aboard our new boat back in home waters.  It felt great!  We have stayed aboard since then, only going home during the day to run errands, pick up gear, and retrieve necessary tools and supplies.

With the help of a few buddies on Saturday morning, Bruce used the crane to get the electronics arch lifted and bolted to the flybridge, leaving it in the tipped-over position so he could inspect and sort out the wiring.  As he got inside the guts, expecting to find a relatively straightforward job of re-connecting wiring that had all been properly disconnected, what he found was disappointing.

A lot of wires had been cut rather than disconnected.  What he anticipated as a few hours project turned into a two day project of assessing the wiring and re-organizing and re-running much of it.  The objective was not simply to get things re-connected, but to organize the runs in a sensible fashion, eliminate butt connectors and make sure everything was properly secured. This was not easy work, requiring contortion acts inside the walls of the flybridge as well as multiple trips to West Marine and his workshop at home for tools, parts and supplies.  It was a beautiful spring weekend, so there was a lot of traffic and the head-ache factor was sky-high.  He went through a lifetime of inappropriate language in a mere two days.

Complicating the whole project further was the fact that, as I said, it was a beautiful spring weekend, thus all our boating buddies were on-site and there was a constant parade of visitors popping by our slip to say Hi and get a look at the new baby.  Well, this didn’t always go so well as they often were greeted by said stream of inappropriate language.  By the end of the day, word was out: stay away from Bruce!

This flybridge and arch work too two full days.  By the end of the day on Sunday Bruce was exhausted, cranky, and finished.

On Monday morning the yard provided two men first thing in the morning, and they quickly and easily lifted the arch into place.  Finally.  That enabled Bruce to move into the pilot house to start organizing and securing that portion of the wiring, and getting everything fully connected.  By the end of the day on Monday all systems were fired up, tested, and run until everything was verified as working properly.

On Monday evening we enjoyed our very first FlyBridge Evening.  It was a wonderful treat to relax and enjoy the quiet late-spring/early summer sunset.

On Tuesday, the upper deck was cleaned, sealant was removed from fastener holes, and the rails were all bedded and fastened.  With all hardware now bolted in place, the focus for the balance of Tuesday and all of Wednesday shifted to polishing and waxing the flybridge, stack and upper deck.

While all this was going on, I was popping on and off the boat, helping out when Bruce needed an extra hand, and otherwise running around town (largely stuck in traffic) getting all the bits and pieces we needed to be ready for cruising.  Pepper was showing signs of pneumonia again, so he needed a couple of trips to the vet for x-rays, consultation and treatment.  Unfortunately, rather than weaning him off long-term antibiotics as planned, we ended up starting him on a new course of broad spectrum antibiotics to try to stave off this new infection.  Poor Pepper!

The pups are doing well back on their boat.  When we are on-hand, we let them hang in the cockpit and watch the activity with the transom door open.  That keeps them entertained for hours, especially when other dogs are running around, or the kids on the Hinckley across from us are out playing and fishing. 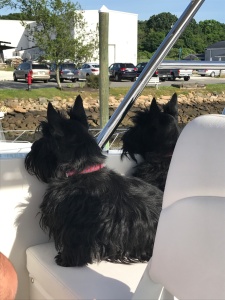 The dogs love being on the flybridge, too, where they can keep an eye on everything going on in the marina.

We, of course, also love the flybridge.  By Wednesday evening the boat was just together enough for us to go for an evening cruise, but as we were contemplating getting under way we looked at each other and agreed “we are just too tired.”

So we retreated to the flybridge to relax and enjoy the quiet of the evening.  Great call.  We still have a long work list to chip away at, but the boat is finally beginning to feel like home again.

One thought on “Putting Her Back Together”