As the summer is winding down, I can’t help but think back over our adventures this past season and remark that our best cruising was during the early spring, when we had cool, crisp refreshing (although not always dry) weather, few crowds, anchorages to ourselves, and generally happy vibe everywhere we went.  This is so different from high-season-mid summer that I really want to share the perspective.

Our first trip was a four-day run to Block Island for Memorial Day weekend.  While weekends on Block Island are a hectic affair during the summer, late May is always a different story.  We left on Saturday May 26 with a mixed forecast, happy to be off the dock and cruising once again.

The run down the bay was flat and fast.  Once outside, things got a little bumpy as we passed Beavertail, then rather wet and uncomfortable around Point Judith.  We pushed the throttle down, steadied her out, drenched her with salt spray, and made it to Great Salt Pond happily and without incident.  As Bruce is very fond of reminding me, it was a lot more pleasant than the same ride would have been on a sailboat.  Got it.

The Pond was E.M.P.T.Y.  We had our pick of moorings.  There were maybe three boats at Champlins, one or two local boats at the Boat Basin, and maybe three on town rental moorings.  E.M.P.T.Y.  Not everyone would be happy with this, but we find it refreshing.

Ashore, the streets were quiet and the bars and restaurants were near-empty.  The skies were gray and the temps were cool.  These conditions are perfect for us and awesome for the pups, who love going for long walks as long as it’s not hot.  And it wasn’t.

We walked to town and back several times during the weekend, and had a few visits with our friends Mark and Rose at Old Harbor Take Out.  We enjoyed drinks and dinner at The Oar overlooking the pond, watching the sunset, and sampled mudslides at both The Oar and at Champlins.

Sunday turned into a very stormy day.  We got the pups ashore for a good walk and an entertaining snack at Champlins before the rain and wind moved in.  After that, there wasn’t much to do other than hang out aboard for the worst of the blow, through the afternoon.  It became rather wild.  The breeze was steady close to 30 knots, gusting to near 40. 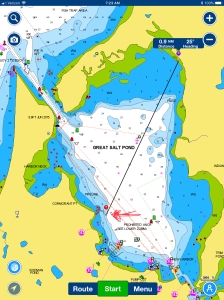 During the afternoon we began to get cabin fever and contemplated how to get ashore.  In the end we decided it would be safer, and definitely drier, to use Oldport Launch rather than our dinghy.  It took the launch several tries to come alongside, as Esmeralde was swinging hard in the stiff breeze.  We were on a mooring in the southwest corner of the pond, on the lee shore with almost a mile of fetch across the pond to the northeast.  Not for the faint of heart.

The launch tried to pick up two couples from one of the few other boats in the harbor, but one of the ladies was terrified and wouldn’t make the leap to the launch.  It turned into a not-so-pretty scene when the second lady started berating the launch driver for being incompetent.  She was a fool. 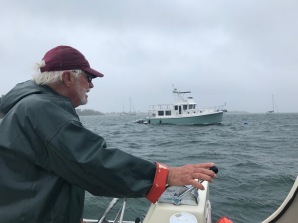 We made it ashore safely (without the two couples who caused a scene), went for a blustery walk, then took shelter in The Oar for a drinkie and a snack. Bruce decided it was a perfect afternoon for a Bucket ‘o Chicken.  The flags at The Oar told the story of the day.

By Memorial Day Monday, the storm had blown itself out.  It was gray and breezy in the morning, but dry and much calmer.  Perfect for another long walk with the pups.  Even more perfect when Bruce spied a home made strawberry rhubarb pie (!) at The Depot.  This was an unexpected bonus, and Bruce determined that we all absolutely deserved pie after suffering through the storm.  So pie it was.

During the day the wind dropped off further, the sun came out, and by late afternoon we were able to enjoy a delightful spring Flybridge Moment. Even Rody joined us on the Flybridge to celebrate the Holiday.  The evening walk ashore was lovely.  We enjoyed the sunset sitting on the deck at The Oar.  After sunset, the full moon rose over The Oar.  Beautiful.  This is why we like Block Island in the early spring.  Before the mob arrives. 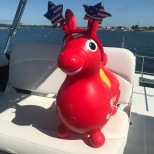 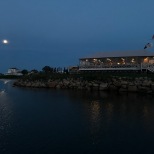