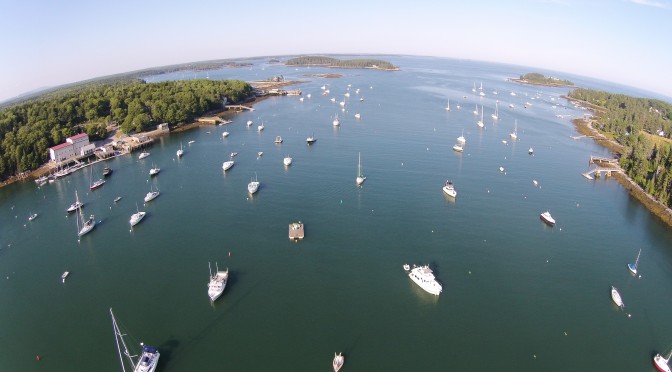 Back in Maine.  Down East.

It’s so familiar to us now, having cruised the coast for four-to-five weeks pretty much every year for the last twenty years, that the thrill that awaits first-timers has worn off.  We almost didn’t make the trip this year because it just didn’t hold the grip on us like it has in the past, but somehow, we still went.

We do love Maine.  This year, our approach was a little different from previous years.  We kept it simple.  We catered to the needs of the dogs and crew more than the need to explore and create adventure.  It might seem like a boring cruise to some, but for us it was visiting comfortable spots and keeping the thrill-factor to a minimum.  Maybe we’re getting older.

So when we left Boothbay, our incentive was less on exploration, and more on catching up with some friends we never see.  The departure from Boothbay Harbor was, as always, full of classic Maine scenes, but the fog that always seems to plague us leaving the harbor was blissfully absent.  We motored out alongside another American Tug we had encountered last year, the 36′ Emily B from Cousins Island, Maine.  The day-tripper boats were leaving for their morning excursions, the weather was calm.

The obvious destination was Tenants Harbor.  We always enjoy our stopovers in Tenants.  The entrance is marked by the Southern Island Lighthouse, which was owned by the American painter Andrew Wyeth and his wife Betsy, and is now owned by their son Jamie.  According to Lighthousefriends.com it was built in 1857, decommissioned 1934, and is one of 15 privately owned lighthouses on the coast of Maine.  The base of the belltower housed Andrew’s studio, and the lighthouse is the subject of many Wyeth paintings.

For years, on arriving in Tenants Harbor we would dinghy ashore, bug repellant in hand, and have lobster at the iconic dockside Cod End, which underscored our arrival Down East.  During our 20 years of visits, the Tenants Harbor waterfront has evolved.  In 2013, the Cod End closed, although they still rent moorings to transient boaters (look for the bright fluorescent green/yellow lobster buoys).  The wharf, owned by the Miller family, continued to serve the local lobster fleet.

In 2016, more change came to Tenants Harbor when Luke’s opened in the vacant Cod End building on the wharf.  Luke’s is a chain of lobster shacks owned by Cape Elizabeth native Luke Holden.  A story in the Portland Press Herald describes how Luke’s came to Tenants Harbor, and also demonstrates the larger roll Holden’s company plays in the  lobster industry in general.  It is an interesting tale that underscores some of the challenges of keeping the Maine lobster industry alive.  We haven’t tried Luke’s, so we can’t vouch for the experience.

With the Cod End gone, a couple of years ago we went off in search of alternatives and stumbled across The Happy Clam, which is a cross between a German bierhaus and a Maine lobster shack.  We love it!  Bruce can’t get enough of their German beer and schnitzel, and I am happy (as a clam) with either lobster or clam rolls and chilled white wine.  The pups are welcome on the porch, which seals the deal for us.

And of course there is The Schoolhouse Bakery next door which is  a simple place, but has some of the best fresh-made Maine whoopie pies we have ever had…can’t beat that!

So while Tenants Harbor has evolved, it is still a fun (and convenient) stop along the coast.