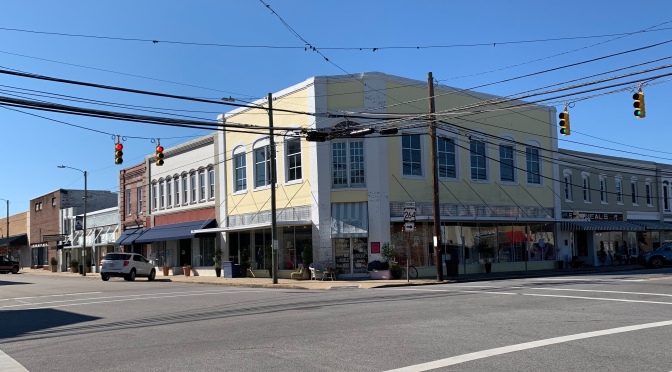 We had a lovely visit to Belhaven, but Wow! Major hurricane damage was still in full display.

After our layday in Coinjock we were looking at a 74 nm run to Belhaven so we were up for our o-dark-hundred early-start program of coffee at 4:30, walk the dogs at 5:30 and cast off at 6:30 (sunrise-ish). This works well for us as the caffeine has time to enter the bloodstream and the dogs get a decent stretch before a long day cooped up on board.  It also give us a nice opportunity to experience our destinations in the pre-dawn quiet of the day which is usually a lot different from daylight action.  It might sometimes be hard to get out of bed, but it’s usually worth it.

It was pitch black, damp, chilly and overcast when we got the dogs off onto the dock.  No lights were on aboard any other boats.  We had the place to ourselves so we allowed the dogs a little off-leash time, something that is rare and special while traveling.  By the time we headed back to Esmeralde forty minutes later, lights were beginning to glow from a few other boats.  The day on the waterway was waking up.

We were the first boat off the dock that day, just after first light but well before sunrise.  Drizzle began as we put her into gear, and we headed south down the North Carolina Cut into the broad but shallow and winding North River.

We were alone on the waterway for almost an hour as the sun rose but remained hidden behind dark low clouds.  We passed a number of smaller sailboats anchored in the shallows off to the sides.  This is what you often do when cruising up and down the ICW, but it is rarely an option for us, as we have to get the dogs ashore and access is slim-to-none along these marshy inlets.

Before long, the parade of boats was in full display.  We could see it develop behind us on AIS, and the faster boats began to pass us.  Oh joy, more opportunities to perfect the slow pass.

From the sheltered waters of the North Carolina Cut and the North River, our route took us across the broad and shallow Albemarle Sound which is known to be snarly at times when the wind picks up.  Some friends had done it the day before in 25 knots gusting to 30 out of the north, and their reports were that it was rather uncomfortable, even running downwind.  We saw as much as 25 knots, but the ride wasn’t too bad.  About half way across we began to fishtail on the quartering waves, so we pushed the trusty throttle down and scooted across to the entrance of the Alligator River.  There things quieted down nicely, especially after we passed through the Alligator River Swing Bridge, which opened for us on request.

The trip along the river was pleasant.  We passed a few sailboats actually under sail and enjoying the moderate northerly breeze.  Off to our east lay the 152,000-acre Alligator River National Wildlife Refuge, home to black bear, deer, river otters, and red wolves, along with a variety of birds, reptiles, and amphibians.  In the winter months it is rich with waterfowl and migratory birds.

The Red Wolf  (Canis rufus) is one of the world’s most endangered wolves. Once declared extinct, Red Wolves have been re-established in eastern North Carolina. When the red wolf was designated endangered in 1967, the U.S. Fish and Wildlife Service initiated efforts to conserve and recover the species. About 40 now roam in their eastern North Carolina native habitat.  About 200 are in captive breeding programs.

While we saw neither black bears nor red wolves, other cruisers, especially those who need to get ashore because of dogs on board, do worry about encounters.  I stumbled across this series of posts on Facebook (see photo to left) which more or less summarizes the challenges of getting ashore on the ICW.  I don’t know whether to laugh or cry.

From the Alligator River we entered the Alligator-Pungo Canal.  This is a 21-mile mostly straight, narrow and sometimes log-strewn and shallow stretch of brow, root-beer colored water that would not make my ICW favorites list.  There is virtually no civilization. There was zero cell service.

There was a significant amount boat traffic on the canal so we found lots of opportunity to further perfect the slow pass.  On two occasions when we were the pass-ee, we were rolled very badly by poorly executed passes by pass-er.  One of these rolls actually toppled our sturdy, stable salon table.  Fortunately, a lifetime of offshore sailing has given us good habits in stowing a boat before getting under way, otherwise we would have had a mess on our hands.

It was a relief to get out of the Alligator-Pungo canal and into the much more attractive Pungo River, then around the corner to peaceful Belhaven.  We had been looking forward to seeing Belhaven, as the reviews are strong.  It would be our first real Carolina inner banks village.

We were directed alongside at the Belhaven Marina by the now-famous harbormaster / dockmaster Gregg Baker.  It was a relief to shut down the engine.  We tossed the pups ashore on the grassy lot.  Bruce collapsed into one of the convenient lounge chairs alongside, and firmly announced that he “like[d] it here.”

After we settled in, the skies cleared enough for us to sneak in a Flybridge Evening featuring pleasant views in the late afternoon light across Pantego Creek and the Pungo River.

Like many of the towns and marinas we have experienced along this trip, the town and marina facilities are a teensy bit overstated until you get accustomed to the scale of things.  The marina is small and simple, but they extend a warm and efficient welcome.  Infrastructure is crude but complete.  The promise of “excellent dining and wonderful shops” falls a bit short.  There are restaurants and shops, but they tend to be simple and not-so-numerous.

I think these remote communities try very hard to support their minimal economic base — they have to — so they use language in their promotional materials that over-sell to a measurable degree.  However, that’s not to say that we (and many others) don’t enjoy them for what they are and appreciate the services offered.  We do!

This year, things are especially challenging because of Hurricane Florence in early September and Hurricane Michael in early October.  Wow.  The damage inflicted on the towns, the infrastructure, the homes and the residents is substantial.  They are working hard to recover, but it isn’t easy.

Most of downtown Belhaven was vacant or boarded up.  The stores that were open were operating out of spaces that had clearly been gutted down to the concrete, wall spaces were not yet fully built out, and display materials had been salvaged and re-purposed.  Most had been inundated with between 36′ and 48″ of water.  The effort to recover is, to me, unimaginable. 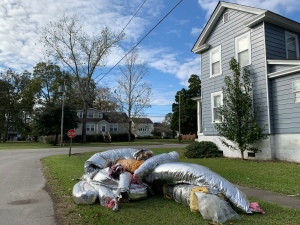 Walking around the residential neighborhoods, we were confronted on every block with piles of insulation, ducting materials, soaked furniture and belongings, all waiting for a bucket loader to scoop it into large trucks to be carried away.  Some homes were occupied.  Others were vacant.  Many were for sale.  The elevation of each house was critical to its condition.

In spite of the devastation, we enjoyed our visit to Belhaven.  Although the weather was largely gray and cool, walking around the neighborhoods was pleasant and the dogs enjoyed a lot of leash-freedom.  Lovely homes from the late 1800s and early 1900s dotted the wide, tree-lined streets.

We sampled fare at both The Tavern at Jack’s Neck and Georgie’s Seafood, and even made ourselves at home at the locals favorite, the 1970-s era pool hall/ game room Rack Time Bar, where we met the resident bar-cat named 8-Ball.

Rack Time even allowed dogs, so we returned after dinner for a nightcap with Mattie and Pepper.  They learned right away that 8-Ball was thoroughly In.Charge.

4 thoughts on “Into The Heart of Hurricane Florence’s Darkness”