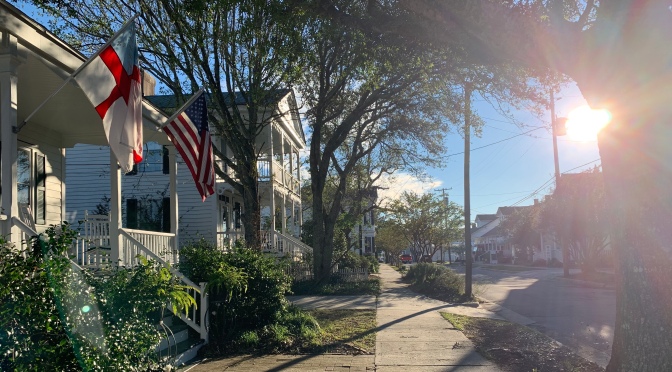 They are very different places but we appreciated the benefits of both.

The Neuse River was fiesty when we followed a shrimp boat out of the narrow channel, leaving Oriental at about 0900.  The sun was shining and the wind was biting cold, but we were toasty in our cozy pilot house with the replacement Webasto heater honking away happily in the engine room.  Our visit had been pleasant and successful.  We were ready to roll on.  We had Beaufort, NC in our sights.

The day’s run was a quick and easy 20 miles.  The first few miles were across the exposed Neuse River, which was bumpy with the energetic post-frontal northerly.  We scooted along, enjoying a fast ride until we entered the protected and lovely Adams Creek.  Once inside, we slowed down and enjoyed the kind of travel we so longed for in the ICW, but of which we had seen very little.  The water was calm, the skies were clear and sunny, and the scenery was lovely. Traveling at trawler speeds of seven to eight knots is a very pleasant way to go. We like having the speed, but we also love slow.

Signs of hurricane damage were everywhere along the banks of the creek and canal.  Trees were stripped of their foliage, leaving brown where there should be green.  The banks were torn up with toppled vegetation.  Some houses were vacant, some roofs were covered with tarps.  Docks were broken up.  We expect to see a lot more of this in the days ahead as we pass through the areas that were mauled by Hurricane Florence.

Oh, and did I mention that at home in Jamestown, we had the first snow of the season?  Yup!

It was before noon when we came up to the retired bascule bridge that used to connect Beaufort to the causeway to Morehead City.  The bridge was being deconstructed, and was closed.  We called the bridge operator, and he politely asked us to stand by while he cleared the span of workmen and equipment, then opened the still-functional span and allowed us through.  Professional, efficient, and pleasant.  Thumbs up.

Just beyond the bridge, we turned east and called the Beaufort Docks for instruction.  The guys were delightful and helpful, although there was some confusion ashore when for some reason the fellow I was speaking with on the radio couldn’t identify our boat while I was holding just off the docks.  Eventually some unknown helpful soul came on the radio, “Fred, she’s sitting right in front of you!”  Welcome to Beaufort!

The Beaufort waterfront is very pleasant. There is a long boardwalk with near-total public access for over a mile of public docks and seawall along Taylor Creek.  Handsome yachts filled the transient slips.

Carrot Island, across the creek, is part of the Rachel Carson Estuarine Reserve which encompasses a total area of 2,315 acres. One of the most notable features of the reserve is the population of wild horses that often congregate on the shoreline and can sometimes be seen from the Beaufort waterfront.  Alas, we did not see any during our visit.

Beaufort was established in 1709 and is the third oldest town in North Carolina.  Its history is on display in the North Carolina Maritime Museum while The North Carolina Watercraft Center carries on the rich boatbuilding heritage of the Carolina coast.  The town is rich with historic homes along pleasant tree-lined streets.  It is lovely to walk around the neighborhoods, which fared much better in Hurricane Florence than did the structures of Oriental.

There are lots of shops and galleries to choose from, although I confess we were a little disappointed to find that there was too much emphasis on logo T-shirts, and less on quality merchandise — with a few exceptions, of course.

And there are plenty of eateries and drinkeries.  On the advice of a friend we tried Aqua, which is off the main drag and you wouldn’t know it was there unless you searched.  It was excellent: great food and wonderful wines by the glass or bottle.  If you get a chance, Go!

Crab cake and rack of lamb.

Bananas Foster!
We were quite happy with our visit, and while it was just a one-night stand, we do expect to return on our trip north in the spring, and maybe stay a little longer.

2 thoughts on “From One Great Town (Oriental) to Another (Beaufort)”