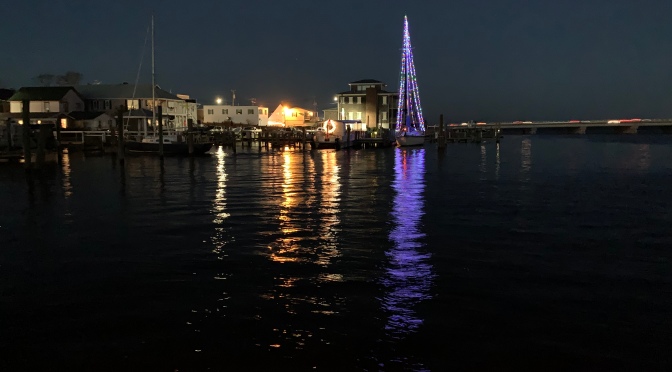 Swansboro had some charm, but in the end, it wasn’t what we hoped.

After a really excellent dinner at Aqua in Beaufort, we got a slow start in the morning.  It was a beautiful day, the kind of weather that the Chamber of Commerce would give the thumbs up to.  Chilly, but clear and sunny with just a light northerly breeze.  Promise for the day was high.

Our destination was Swansboro.  We didn’t know much about it, but the guides gave it good marks for being a quaint and charming town with historic character and good infrastructure for cruisers.  It was only 20 miles away so it promised to be a lovely and easy run.

As we pulled out of Beaufort, we had to weave our way through throngs of recreational fishermen on skiffs and small boats, all taking advantage of perfect November Saturday weather.  Once again, we were treated to views of the extensive damage inflicted by Hurricane Florence.  Beaufort itself was in good shape, but the south side of Morehead City was basically wiped out.

The bulk of the itinerary took us through Bogue Sound.  Bogue is wide and very shallow.  Staying in the ICW channel is critical, and we passed through some very skinny water even while in mid-channel.  I think the shallowest we saw was just over seven feet — fine for us, but on the iffy side of things if you are a deep-draft sailboat.

The primary barrier islands were a couple of miles to the south of us across the sound, so there was a long fetch and the properties along the western shore, which we travelled closed to, were very banged up by Hurricane Florence.  The descriptions I would offer are the same as the few previous days’ trips so I won’t repeat myself.

We arrived at Swansboro having called ahead for dock space at the town dock.  We had spoken with a friendly town administrator who took our credit card over the phone.  She was off-sight, and could not tell us precisely what we would find on arrival.  Apparently the docks are not monitored.

Coming into the harbor it was difficult to identify which was who, because pretty much all of the waterfront was wiped out and not functional.  One long floating dock seemed to meet the description we were looking for, so we tied ourselves up behind a fellow trawler.

The rest of the slips were empty except for a couple of derelict 30-ish foot sailboats with people living on board.  The effect of this, combined with the rest of the damaged waterfront, was — shall we say — sad and depressing.   We got the feeling that a few folks are taking advantage of the lack of oversight of the facility.  Someone expressed surprised that we had actually called to pay for our dockage.

What happened to us at Swansboro underscores the concept of ‘initial impact’.  What you experience first, whether with a person or a town or a boat or a country or a plate of food, colors the rest of your experience.  The place gave Bruce, in particular, the heebeejeebees.

We went for a pleasant walk.  The afternoon was still sunshiny-bluebirdy and the temperature was perfect sweater weather.  The dogs were happy to be exploring a new town. We even had to climb up some elevation, which was a first since we left Annapolis a few weeks earlier.  I enjoyed the small cottages, many of which had historic plaques which collectively told me there had been a population “explosion” around 1901 – 1906.

Swansboro actually started as a settlement around a plantation, and was incorporated in 1783. In 1818 the first river steamboat constructed in North Carolina was built in on the Swansboro waterfront. The town is sometimes called “The Friendly City by the Sea”.  It boasts that it’s annual Mullet Festival is one of the first coastal seafood festivals in North Carolina, and the town is featured as the setting of Nicholas Sparks‘ novel The Guardian. The Swansboro Historic District was listed on the National Register of Historic Places in 1990.  Swansboro was among the cities hardest hit by Hurricane Florence. A record 30.58 inches of rain fell at Swansboro, breaking the previous state record of 24.06 inches. 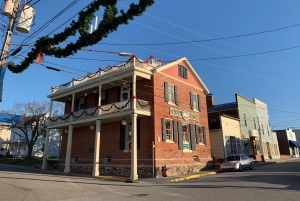 The historic structures do provide a cultural theme, but there are a few too many less-than-historic and architecturally-vacant buildings scattered around the main street.  The end effect is discord.  This, combined with the off-season lack of vibe and the devastated waterfront infrastructure all contributed to our sense of malaise.

That evening was the annual pre-holiday Lantern Light Walk.  We headed in to grab a bite to eat when the event was getting under way, and were surprised by the very large crowd that had congregated.  I wondered where everyone had come from!  Streets were closed to cars. Kids, strollers, dogs, parents, grandparents, teens — everyone.  Community dance organizations and musicians performed on the town pavilion.  There were tables of hot cocoa, wine, cookies and cakes, and games.  Christmas carols filled the air.  Shops were open late and offering goodies.  Sidewalks were lined with paper bag candle luminaries.  Christmas decorations were everywhere.  It was very festive. 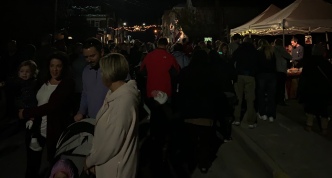 Until it wasn’t anymore.

As we headed back to the boat after a disappointing dinner, emergency crews were racing towards the pavilion area.  We went back to the boat to get the dogs for their evening walk.  When we returned, we found crews performing CPR on a poor fellow who had collapsed in the middle of the street.  Making the scene even worse, crowds had gathered around to stare at the whole procedure.

I pulled dogs in the opposite direction, trying to get away, against the flow of the mob.  It turned the whole scene into a very bad movie.  Christmas carols continued to play over a sound system, the streets were lit up, wine was still being served.  An ambulance arrived and incredibly, people failed to clear the way.  Bruce and I — strangers to the town — were left shaken by the whole event.  It was astonishing to us how non-responsive the crowd seemed to be.  We returned to the boat quite unsettled.

So no, Swansboro was not our favorite stop of the trip.  We felt a little bit better the next morning when we woke to yet another beautiful day, but we were content to be moving on.  We looked forward to a nice day on the waterway, headed for Wrightsville Beach.

3 thoughts on “A Bluebird Day to Swansboro, NC”