Leaving Wrightsville Beach, we were nosing around looking for a nice spot for Thanksgiving

Have I ever said we cruise without a plan?  Well, yes.  We cruise without a plan.  No plan can make daily planning frustrating at times, but that is how we roll.  Our only short-term goal was to find a place to have some heater parts shipped for arrival within a few days after Thanksgiving weekend, hopefully in a place we might want to spend a few days so we would have repair/parts flexibility.  That was all shaping up to look like Charleston after Thanksgiving weekend.  We had no need to move fast.

So when we left Wrightsville Beach on the Tuesday before Thanksgiving we had only a vague notion of a) where we would go that day and b) where we would be for Thanksgiving.  And since this entire trip is made up of unknown territory and destinations, we are often shooting in the dark.

Based on weather, distance, mood and some vague input from various sources, we aimed for the historic waterfront town of Southport, North Carolina.  It would be a short ride, just 22 miles, so we had a leisurely start after walking to Harris Teeter in the drizzle to try to fill in some blanks in our Thanksgiving Day supplies.  It was quiet on the river when we left Wrightsville Beach at 10-ish in the cold rain with a brisk westerly wind.

Not far out we passed our buddies aboard Vector and had a nice chat with them while cruising along.  They have injector issues that are hindering their plans, so we are not alone in managing equipment breakdown challenges. 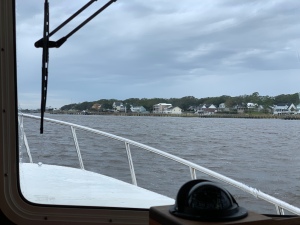 Soon the tedious pass-and-be-passed slow-pass dance began with other ICW transients like ourselves.  Piloting required focus.  Although it wasn’t great weather and it was a weekday, there were a fair number of small fishing boats scampering around in the rain. There were several inlets that threatened shoaling.  All this meant there was a lot of speed management going on, which is frustrating and stressful.  People are people and everyone has different expectations and tolerances.  This presents challenges in tight quarters.  We are learning to manage.

The route had two significant changes in scenery to break the ICW-Ditch-tedium.  First: Snow’s Cut is a potentially challenging little stretch of narrow channel, rocky outcrops and strong current.  We proceeded with caution.  We knew a tug with a large dredge barge and multiple tow components had gone through shortly before us, so we constantly reminded ourselves that if he could do it, surely we could too.  And we did.

Once through the cut we were in the broad, fiesty Cape Fear River that leads from the Atlantic Ocean up to Wilmington, North Carolina.  It has a large, heavily used shipping channel, tanker ports, and open fetch.  It was a relief to be able to run our own speed and not worry about a myriad of small boats and docks and people.  It was still drizzling.  Then raining.  The westerly breeze was smart, the skies were threatening and the brown river surface was kicked up.  We passed close by our barge and tug, then had the place to ourselves as we made the final approach to Southport with Bald Head Island and Atlantic ocean off to the south.

We re-entered the ICW and immediately turned into the Southport Marina/Zimmerman Marine basin.  The dock staff greeted us, friendly in spite of having to stand around in the rain to show us into our slip.  It is an excellent facility with easy access, good infrastructure, attractive shore space for the dogs, and easy access to the town.  It was still early afternoon so we had plenty of time to poke around.

Once we were settled in, the rain moved out and left us with a gray, damp and chilly afternoon to explore. We hitched up the pups and went to see what Southport was all about.  After our disappointment with Swansboro a few days before, we kept our expectations low.  Happily, Southport was a much more cheerful spot.

The Southport area was originally explored in the 1500s by Spanish explorers.  In the 1700s British settlements in the area suffered from attacks by pirates and privateers.  In 1744, the same year France declared war against Britain in what became known as King George’s War, a fort was proposed near the mouth of the Cape Fear River to defend against the attacks.  Finally, in 1748, construction began on Fort Johnston.

Southport was originally named Smithville in 1792 and grew as a fishing village and support community for the military activity at Fort Johnston.  In an effort to promote the town as a shipping port, the name was changed to Southport in 1887. 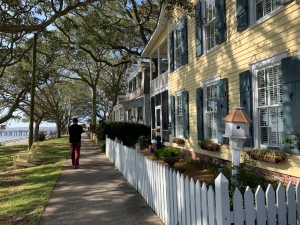 Southport is a nice walking town.  It is small, but there are a variety of streets, streetscapes and views that are pleasant.  On the waterfront there is a nice park (currently under reconstruction, thanks to Hurricane Florence), a community center with a broad terrace overlooking the river, a playground and tennis courts, the North Carolina Maritime Museum and Fort Johnston. 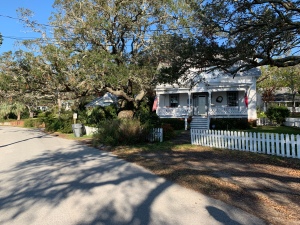 Most of the streets are broad and lined with mature trees providing shade and texture.  Historic cottages, many well maintained and restored, provide the cultural base of the community and are charming to look at.

The main drag, Howe Street, runs inland from the Waterfront Park at the Cape Fear River entrance to the ICW.  Shops of all sorts are plentiful, and most were decked out for the holidays.  I’m still having trouble processing the fact that it is holiday season, but apparently it is in full swing.

The harbor is lined with several casual seafood restaurants and a great little fish market. Much of the wharf structure was damaged by Hurricane Florence, and the town transient docks are closed, awaiting permits and reconstruction.  Development along the harbor is apparently stymied by routine flooding, which we experienced the morning we left when astronomical tides and strong winds drove water levels up a couple of feet above normal, flooding the small structures along the edge as well as the parking area.

We had fun wandering the neighborhoods and scouting out particularly interesting businesses.  The little Side Street Bakery smelled like heaven.  We can highly recommend the pumpkin rolls.  The Wine Rack proved enticing so I had to get some Dark Chocolate for Red Wine.  And the highlight was The Marketplace on Howe, which offered some great fresh shrimp right off the boat, Hippie-Chick Granola from nearby Oak Island (Yum!), a selection of veggies, an extensive collection of antiques and collectibles, and most of all, a colorful proprietor who is a true original.

On the way back to the boat we dropped in at one of the First National Bank to replenish our cash supply.  The ladies had a near meltdown at the sight of Pepper and Mattie.  The cookie box was retrieved from behind the counter and we all had a party.

It was about then that we decided that Southport would be a fine place to spend Thanksgiving.  We checked with the marina dock office to make sure we could stay, and sealed the deal.  Our first Thanksgiving aboard Esmeralde would be in historic Southport, North Carolina.

It was time for me to start cooking.