We wanted it to be special, in Southport, North Carolina.

Being on this cruise, a big adventure, our first trip down the ICW, is very special.  We have a lot to be thankful for.  We wanted to take this Thanksgiving seriously and celebrate our good fortune together.

We had the turkey on board, and with a little luck it would fit in the oven of our Force 10 propane stove.  It was the same stove we had on our Sabre, but we had never cooked a turkey in that one either.

I like to cook, and I’m not big on processed/packaged foods, so shopping for a meal I could actually prepare on the boat was challenging.  It needed to be authentic.  It needed to be good.  It needed to remind us of home.  We had done the shopping at a Harris Teeter in Wrightsville – not one of their best stores, and it was well picked-over, but we got the job done.

We decided to stay in Southport for The Big Day.  First up, I needed to go for a run.  This would help get me prepped for the holiday.  It was a nice town to run in, out east around the waterfront, loop back through the simple, pleasant residential neighborhoods, then back to the boat.  The weather was perfect and it felt great.  I need more of this on this cruise.

Normally at home I start cooking for the feast about two weeks ahead of time.  This time I started one day ahead.

First up: cranberry orange relish.  This was pretty easy, only three ingredients: fresh cranberries, an orange and sugar.  You don’t even have to peel the orange…but you do need a food processor.  I had to make do with my NutriBullet because I don’t have a processor on board.  (Note to self: thanksgiving is much easier to prepare if you have a proper food processor.)  I got it to work.

Next up, beet hummus from dried chickpeas, organic tahini, lemon, garlic and a roasted beet that I had saved from a bunch I had roasted in the oven a couple of days before.  Once again, a food processor would really have helped here, but I managed to get it to pull together just fine in my NutriBullet. 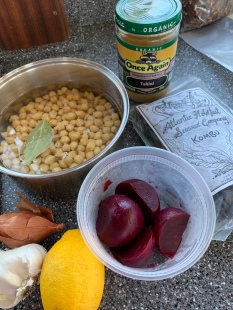 I chopped up and roasted a butternut squash (it was a sad squash, but it was all I could find) with some onion, olive oil and sage.  Then I toasted up some hazelnuts to sprinkle on top.  After that I cubed a loaf of sandwich bread and dried it out in the oven for the stuffing.  Then I quartered up a batch of brussels sprouts that I would roast in the hot oven with chopped pancetta after the bird was finished. 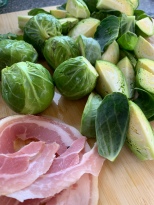 During a walk around town that afternoon I searched for greens, because I like greens.  One of the challenges of these small towns is that they are choc-o-block full of gift shops and restaurants, but basic groceries tend to be a couple of miles out of town.  I had almost given up when I heard from a fellow boater that at the fish market on the wharf a local farmer was selling veggies.  Yeah!  I scurried down to catch him before he left.

What a charming man, who had fresh-cut collards, kale and turnip greens. All my favs, but not much that would excite Bruce.  I bought a bunch of each anyway, vowed to find some way to cram them in the small fridge, and paid a total of $2.10.  This made me a little sad: it was nothing, for fresh, local, healthy food.  Wow.  I was grateful for that kind man who provided greens for our table.

One more task before dinner: the crust for the pumpkin pie.  Normally I make a proper crust with flour, butter, shortening and salt.  This time I just couldn’t face all the rolling and flour everywhere, and I didn’t have a rolling pin and probably couldn’t have found one in pretty little Southport.  So I switched gears and dug up a recipe for a pecan crust that I could press into a pie tin rather than roll out.

It was great!  I toasted some pecans, processed them quickly in the NutriBullet with rolled oats, spelt flour, sea salt, olive oil and maple syrup, and voila!, a great pie crust for the pumpkin pie.  It got pressed into a tinfoil pie pan (second note to self: never again make a pie in a tinfoil pan) and baked it for 20 minutes.

In anticipation of the feast the next day we had a simple supper on board.  It was fresh shrimp from the fish market, steamed, and Bruce grilled some asparagus.  Delicious.  And the sunset was spectacular. 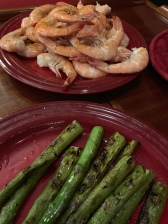 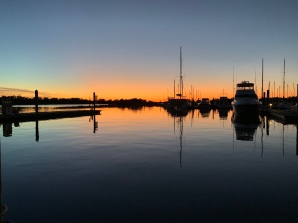 After dinner, and after sunset, I finished making the pie.  Here’s the bad news: I had been unable to find a fresh sugar pumpkin in Wilmington.  Can you believe that?  At Thanksgiving??  In retrospect perhaps I should have given a nod to southern tradition and made a sweet potato pie, but we were fixated on our own traditions and I’ve never made (or even tasted) a sweet potato pie, so I did pumpkin.  And this year, for the first time ever, it was canned pumpkin.  Well, this is all about adventure, so there you go.

The recipe I like to use for the pie is for pumpkin mascarpone out of Bon Apetite.  It’s very good.  And it requires…wait for it…a food processor.  Ta-dah, once again, the NutriBullet pulled through.  It was a little challenging, but it worked fine.  Into the crust when the filling, and into the oven went the pie.  An hour later, Ta-dah! Thanksgiving pumpkin pie.

We went to bed early to rest up for Thanksgiving.

We woke up to a drop-dead gorgeous day.  Wow: cold, clear, sunny, calm.  Simply beautiful, and perfectly Thanksgiving.  The only disappointment was that we weren’t out on a hook somewhere.  We had coffee, then I had to get the bird prepped and in the oven before we took the dogs for a walk.

Bruce has always loved his mother’s sausage stuffing, so that’s what it had to be.  I chopped and sautéed a pile of onions and celery in butter, then added a package of breakfast sausage and sautéed the whole mess until the sausage was browned and cooked through.  This got tossed into a large pot with the bread crumbs I had cubed and dried the day before, along with a couple of farm-fresh eggs and a pile of fresh chopped parsley and sage and salt and pepper.  This all got loosely packed into the bird. 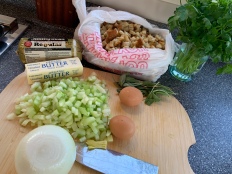 The turkey was a 12-pounder.  Normally at home we have something around 18 – 20 pounds, but we feed more than two people when we are at home.  And we like leftovers!  A 12-pound bird seemed small, but found out later that my Mom and Dad had an 11-pound turkey for five adults.

In order to truss the animal Bruce retrieved some seizing wire from the tool kit, and after washing it thoroughly, I used it, along with some broken bamboo skewers, to string the bird together.  The Harris Teeter had had no string and no turkey-trussers, so we had to improvise.  Voila!  Ready to roast.

The bird, thankfully, fit into the oven.  It was very close to the top so I tented some foil over it to try to prevent over-browning (burning!) on top.  Check.

The dogs were hunkering for a walk.  By the time I had cleaned up the debris, the boat was beginning to smell delicious.   Bruce was beginning to wine about being hungry.  Off we went for a long and beautiful North Carolina Thanksgiving day walk.  It was very quiet in Southport, but a few other folks were doing just what we were.  It was very feel-good.  And we found some delightful Thanksgiving lawn-art humor.

By the time we got back to the boat the turkey smells were bursting out of the windows and doors and wafting down the dock.  It was great!  It was such a perfect Thanksgiving setting, the meal was shaping up nicely and we were happy.  Pepper took up station in front of the oven and stood guard.

Fast forward to 1:00 pm, after chatting by phone with various family members.  Right on cue, our bird was done.  We always use an instant read thermometer and poke it into all the bird’s various body parts and the stuffing to confirm it is cooked through.  Perfect.  Out came the bird, in went the brussels sprouts, which had been tossed in olive oil, salt, pepper and chopped pancetta. I did a quick sauce of some of the local greens in garlic and olive oil.  By the time the bird was ready to carve, the sprouts and greens would be ready to eat. 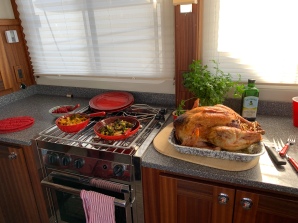 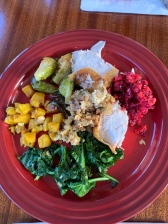 We spread everything out in serving dishes just like we would have at home, paused for thanks, poured a nice bottle of wine, and enjoyed a wonderful meal.  We topped it off with the pumpkin pie.  Bruce had the important job of “whipping” the whipped cream, and he did it exceptionally well.

Bruce proclaimed the bird and the pie as good as any we have every had (even with that canned pumpkin).

We were very proud of ourselves for pulling this off so successfully.  It was a lot of fun, and we do indeed have a lot to be thankful for.  Before we had finished the pie, Bruce was wondering aloud what we would be having for Christmas dinner.  *sigh!*