Key West, Part #1 was about loss and grief.  While that is not what I would wish of Key West, it is what it was.  There is another side, though, and this is that story.

Our visit to Key West was split into two distinct segments, as the previous post makes clear. I’m not really going to define our experiences in Key West in terms of how they were in the first part or the second part, even though they were different.  Instead, I just want to talk about the Key West that we experienced overall.

The boat was in Key West for roughly six weeks.  We were there for about four and a half weeks, which was a couple of weeks longer than we first planned. We actually thought we might get sick of Key West after a week or two and were prepared to leave early if that happened.  That didn’t happen!

The first couple of weeks (early to mid-January) were delightfully cool.  I even needed long pants and a jacket at night.  The last few weeks (late January and early February) were oppressively hot and humid.  We had to be very careful walking the dogs, and our energy levels were relatively low.

Our previous visits to Key West had been with our 16′ Airstream.  Unless you have access to the military campground on Key West, the closest point to Key West for camping is on Stock Island at Boyd’s Campground.  This is a ten to 20-minute drive to downtown Key West, or a half hour bike ride.  It was a fine way to see Key West for a short period, but for us, it got old quickly.  There was too much driving back-and-forth (which is a nightmare), we didn’t like leaving the dogs alone in the Airstream, and Stock Island itself is not a nice place to wander around; you are pretty much a prisoner inside the Boyd’s like a sardine in a tin. (There are two exceptions to the Stock Island blight: Roostica and The Hogfish. And Stock Island Village, but that’s a different post.)

So.  We were looking forward to staying right in Key West, with unlimited opportunity to come and go from the boat at will, without having to drive anywhere, and without having to worry about the pups.  Our solution was an expensive one, but it was worth it.

There are a lot of options for staying on the boat in Key West.  Most are expensive.  You can anchor, but forgive me for saying the anchorage is not acceptable.  It is exposed from almost everywhere, the current races through it, it is miles from a dinghy dock, and it is littered with derelicts.  Even the town mooring field off Flemming Key is marginal at best.  The dinghy ride is long and often very wet.  With two dogs who need to get ashore several times each day, and two people who like to do different things on different days at different times, it was not an option.

We wanted to be right in downtown Key West, in Key West Bight.  We din’t want to be at Schooner Wharf or Key West Bight Marina, either, which are right in the midst of the action and likely to be noisy.  We had wandered through The Galleon Marina during our Airstream visits and had decided then that it was The Galleon we wanted to stay in.  It’s right there, but a few steps removed from the hustle and bustle.

The Galleon turned out to be a perfect solution for us once we swallowed the price.  The docks were good and the staff was excellent.  Tom and Cyndi were first rate, as were the other three or four who helped us out during our stay.  We had access to the facilities at the adjacent Galleon Resort, although we didn’t use them.

I will admit that it’s not the most dog-friendly place on the planet, but we could work with that.  The  marina folks love dogs; the resort folks, not so much.  Finding adequate green material required heading to the public streets, where green material is sparse at best.  But we figured out how to make it work.

Most of our cruising life is on-the-move.  It was really nice to sit still for a while, in a place where there was lots to do, and at a dock where each of us could come-and-go as we pleased, and without having to negotiate for dinghy time or worry about the dogs.

I loved going for morning runs, before Key West woke up.  It was me, a few other early-risers, and the garbage trucks.  I loved getting over to the south side of the island just in time to watch the sun rise.  Any later than that, and it would be too hot.

If you’re just in Key West for a few days, it’s easy to get bored.  The touristy stuff gets old fast.  But if you are there for an extended visit, you begin to fall into a Key West lifestyle that avoids the tourists and touristy stuff, and life becomes very pleasant.  Long walks on the quiet, shady, pleasant residential streets, meals in off-the-beaten-path holes-in-the-wall, quiet afternoons on the boat, and some excursions off-island to other keys.

And eat.  Did I mention restaurants?  You could eat at a different place for each meal every day for a month and never go to the same place twice.  Really.  We did have a pocket-full of favorites that we repeated regularly.  Moondog Cafe, a new spot near the Hemingway House, was a regular spot for us for an early supper and their bakery with American favorites and authentic French pastries, is fantastic.

The Hogs Breath Saloon outside bar is a Key West icon that we enjoyed early in the day, before it got crowded.  You have to try the Cuban Coffee Queen for a cubano, but we preferred Fisherman’s Cafe.  Louie’s Backyard was great once, and not-so-great the second time.

We could do all the provisioning we needed with just a short walk to Fausto’s, which had a surprisingly good selection of stuff.  Yes, there are cheaper supermarkets but they all require and Uber, taxi or a bus, and we’re totally into convenience.  I also loved Sugar Apple and Date & Thyme, great little health food/organic food spots that are really my thing, but I realize they aren’t for everyone.

The list goes on and on and on.  Discussing the food scene in Key West would require an entire book, and that’s not my job so I’ll stop here.  You’re on your own!

OK, this is like the food thing: it would take a book, so I won’t even try.  If you can imagine it, it’s in Key West.  Watersports, history, culture, arts, museums, resorts, beaches, parks, bike riding, lounging, shopping, sunbathing, boating, deep sea fishing, flats fishing, diving, yadayadayada.  I’m done.

Well, we don’t do night life very well so I won’t even try.  But I can confirm that there is a vibrant night life scene in Key West.  Use your imagination.  If you like to play after dinner, you won’t get bored.  Trust me. 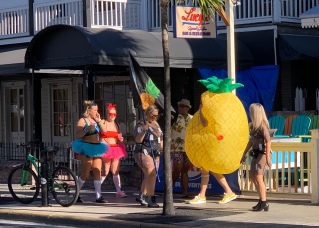 We’ll be back.  And we may even stay longer than we did the first time.  Just open your wallet and don’t count the $$.  You’ll have a great time.