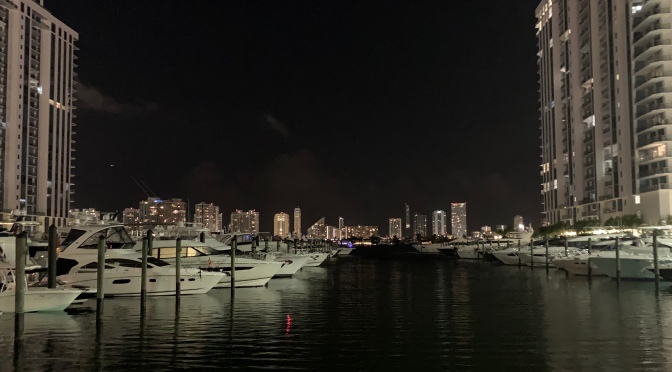 Yes, it is indeed a culture shock to transition in one day from the rustic, laid-back, scruffiness of the Florida Keys to the glitz and glamour, crazy speed-boats, and high-rise glass buildings of Miami.  I do now understand why they call it “the canyons” of Miami.

We woke up to another very hot and humid day in Key Largo.  We have been stifled by weeks of 80-degree temps at sunrise.  Each day ties or exceeds a record high temp for morning lows.  Ugh.  Days are in the mid-to-high 80s and humid.  Some folks love this stuff.  Not me.  Or Bruce.  Or the pups.  We kind of suffocate, like the northerners we are.

But still, it was another gorgeous day.  We were up early, walked the dogs along the grubby roadside, and were under way by 0730.  It was a lovely morning as we passed beneath the Route 1 highway bridge, the legendary Florida Keys Overseas Highway.

Our  route was straightforward, and very diverse.  We passed through Jewfish Creek, into Barnes Sound, Little Card Sound, then Card Sound into Biscayne Bay.  We were the only ones out there.  It was like being out in the South Pacific somewhere, no one in sight, palm trees in the distance looking like South Pacific atolls.

We were not 20 miles from Miami Beach, with nothing but clear blue-green water, bright blue skies, puffy clouds and sunshine.  For a while we were escorted by a small pod of porpoises playing happily in our wake.  Truly a delightful day.

As we transited through Biscayne Bay and found cell coverage, we began to make phone calls to try to find a  marina for the night.  Although we aren’t really city people, we were sort of curious about Miami, never having been there before, and might have enjoyed being in the middle of the action for a day or two just to experience it all.  Unfortunately, marina after marina we called was booked solid.

If I had thought about it, we might have peeked in to No Name Harbor, where boats hang out waiting to cross to the Bahamas, but in truth, there were so many homeless boats thanks to a) the Miami Boatshow displacing everyone and b) the bad weather holding all the would-be Bahamas cruisers in port, I think it would have been very crowded.

After trying everything we could think of in the Miami area, we eventually stumbled across a small, remote marina called Marina Palms in North Miami.  The folks on the phone were very nice and accommodating.  We made a reservation and went back to enjoying the ride.

One moment there were mangroves and open water.  And then, suddenly, there was Miami. I shouldn’t bother to describe it.  Pictures are worth a thousand words.  We had to focus on navigation, but the scenery was tremendous, the boats were out-of-this-world, the cruise ships were massive, and we were very pleased that it was a relatively quiet weekday rather than a weekend, when the waterways are known to over-run by crazies.

A brief glimpse of the setting…

As we found our way among the skyscrapers and down the canals and canyons, we turned in to Maule Lake in North Miami, and then into our slip at the Marina Palms Marina.  We were welcomed by two hispanic deckhands who, with their broken English, could not have been nicer.  I backed the boat in to her slip, never touching the piles or piers, while Bruce handled the fenders and dock lines.

The guys LOVED our boat, which was totally different from anything else in the marina.  Ours is understated traditional, with workboat pedigree.  They are accustomed to glitz and glamour.  Well, they were excited enough about the boat, and declared that she was a sport model because of the red pinstripes.

Then I walked out of the pilot house and their jaws hit the deck.  “SHE drove??!!”  They went insane.  Bruce invited them aboard and they ooooh’d and aaaah’d their way around the boat.  When they saw the red interior upholstery they were delighted, declaring that we really had the “S” sport model.  Such a hoot!  We were, naturally, thrilled by all the attention.

We settled in, got the boat hosed off, and went to check in.  The staff was pleasant, we were warmly welcomed, and Bruce came away with a list of restaurants within walking distance.  Back on the docks, a bunch of Mexican crew on board the large yacht next to us invited us over for a drink (actually, Bruce complained about their loud music and then they invited us over) and proceeded to ply us with fine Mezcal and their home made Mexican soup until we couldn’t take anymore.  It was time to head out to the steakhouse, once we finally extricated ourselves from our hosts with a promise to return after dinner.

We walked the short distance to Morton’s Steakhouse, where we sat at the bar and enjoyed a pleasant dinner and a monster carrot cake for desert.  We needed something to soak up that Mezcal.  It was a fun evening, and fortunately, all was quiet aboard the Mexican boat when we tiptoed by, and we returned to Esmeralde to turn in for the night.

A Miami evening, for sure! 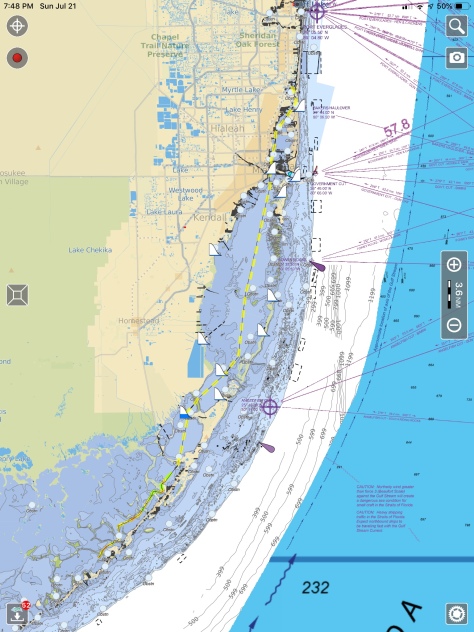