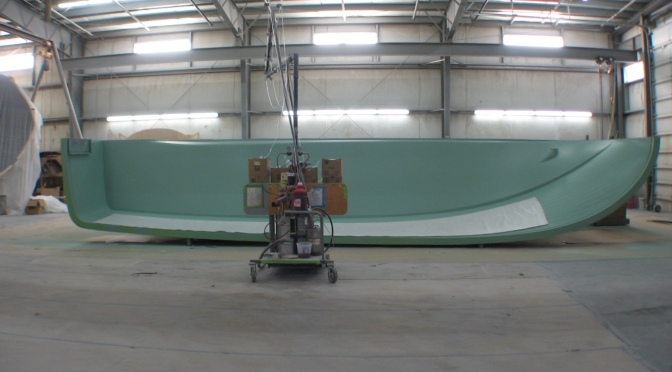 Well, actually we have two half-hulls.

The hull, which is built in two halves, has been sprayed with our gel coat.  The color is Sea Shell Green.

As we have mentioned before, we would have liked a handsome dark color but we have been through the maintenance issues before with dark gel coat and did not want to do it again.  When we scanned the spectrum of lighter colors, we ultimately settled on this light gray-green that started out as a custom AwlGrip color for Shelter Island Runabouts and has expanded from there.  It’s perhaps not a masculine look for a chunky, business-like tug hull, be we think it will work well for us.  Since we are sticking with the same name we have had for all our boats, ESMERALDE, we are sort of stuck with some kind of green!

We loved the pale gray hull on our Sabre 386, but we were afraid that on the tug that color would simply be a “wall of white” and not show off the tug hull at all.  Also, our gray hull had a gold cove stripe that wouldn’t work on the tug, beautiful varnished toe rails, and a lot of light green (“Spa”) canvas, all of which really offer color and definition to the lines and shapes.  The tug has none of this, so we felt we really needed color in the hull itself to show it off.

5 thoughts on “We Have a Half-Hull”