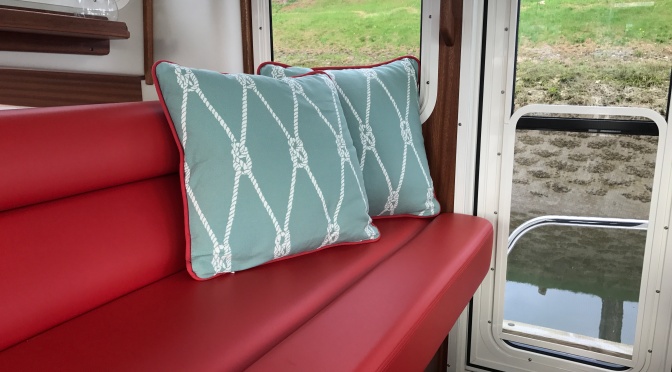 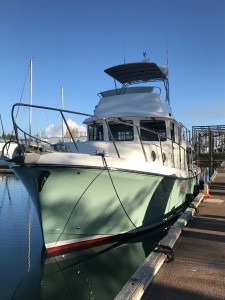 The hull is a gentle green – the gel coat name is Sea Shell Green – and the decks and superstructure are a soft white.  The name on the transom is gold and black, understated but with a touch of fun in the font choice.  The pinstriping detail around the eyebrow, upper deck and stack is a muted red.

So what would one expect to discover upon stepping aboard and peeking inside?  Well, if this were just any boat one might find a muted natural-color upholstery, a soft tan carpet, and perhaps some throw pillows with a splash of color to remind of the Sea Shell Green hull.

But No!  Not on ESMERALDE!  That would be boring!

From the very start, Bruce was set on RED upholstery. I wasn’t so certain, but I rolled with it.  We both wanted something cheerful and fun (we aren’t especially sophisticated).

I was so uncertain of this design theme that I enlisted the advice of talented designer and friend Candy Langan of Taste Design. Our marriage would have been strained had it not been for Candy’s steady hand, methodical approach, sharp eye and hard work.  Even if red might not have been her first choice, she figured out how to make it work for us, and we couldn’t ask for anything more than that. 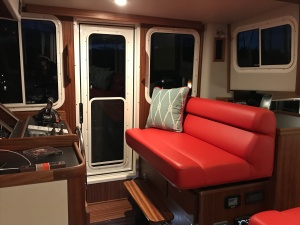 We have Poppy! UltraLeather in the salon, and – thanks to a communication snafu somewhere in the chain of communication between us, the builder and the upholsterer – Poppy! also wiggled it’s way into the pilot house.  The original plan for the pilot house was a neutral Arctic UltraLeather.  We can change the Pilot House back to Arctic at no expense if we wish, but Bruce is so happy with it as is, I suspect it will stay Poppy!.

For the rest of the boat, including the master cabin, guest cabin (or man cave) and flybridge, Candy helped us weave together the different elements into a cohesive package.  I need to give her an exit clause here by recognizing that all the final choices were ours.  She might not wish to claim our little project as her finest hour, but in our book, she is, absolutely, the finest! 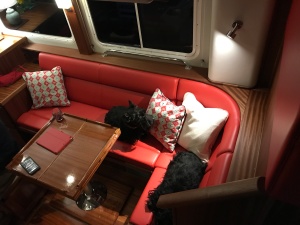 In the main salon, we complemented the Sepele mahogany and Poppy! UltraLeather with some colorful abstract pillows and a sedate soft white pillow with Poppy!-friendly trim.  These were selected by Candy, and were beautifully made by Taste Design.

The countertops are an American Tug standard option, Formica Solid Surface Gothic Cornerstone.  This would not be our first choice, but it was good enough not to push that “custom” button.  Note that the Milk Bones box, half-empty wine bottle and daffodils in their 4″ plastic landscape pot on the countertop are signs of The Good Life.

We upgraded the fridge to a stainless VitriFrigo, which we love.  Yup, that “custom” button.  The tugboat stack has a lovely compass rose inlay that you cannot see in this photo.  I’m saving that for a post about the talented builders at American Tug.

We chose a small lamp for the main salon that I found on Etsy.  By complete coincidence, but appropriately, the lamp was made by an artist based right here in the Pacific Northwest, Kristen Nelson of Krikri Ceramics. Kristen worked directly with the folks at American Tug to make sure the wiring and mounting would work properly, and made a lamp specifically for us.

Our boat has the FlyBridge option, which out here in the Pacific Northwest is a dead giveaway that this is an east coast boat.  We went with the standard white cushions, but added some color with sea shell green-ish indoor-outdoor fabric than Candy found for pillows, with some Poppy! trim.  These pillows, also impeccably made by Taste Design, will do double-duty in the pilot house, as the pillows we originally selected for the pilot house were meant to complement the Arctic UltraLeather, which had magically (and to Bruce’s delight) morphed into Poppy!.

On to the forward cabins.

The master cabin is brightened up with a simple white cotton coverlet and pillow shams, and punched with a bit of the red theme in a cozy red-with-white-appliqué pillow and Maine Wollens throw.

The guest cabin nods back to the hull color, with a sea-shell-ish green cotton coverlet and shams, and also a bit of red in another Maine Wollens throw.  We love cruising in Maine, and bought these throws during a fall get-away weekend in our Airstream, so they add nicely to the package.  Also, the red pillows that were meant for the (would be) Arctic UltraLeather pilot house fit in nicely here.

In the head we replaced all the standard cream-colored surfaces with white, which suits us better, and yes, we punched that “custom” button again to do this.  You can’t see it in the photo, but the head has a fine full-sized shower, which is quite a luxury for us in our world of boating.

All these photos are just simple iPhone snaps.  Forgive the amateur presentation.  I just hope they offer some clue about what we did to the interior of the boat, and why.  For notes on why the hull is this particular color, check the post We Have a Half Hull

And now we can go cruising!

3 thoughts on “Pulling It All Together”