Right on schedule: she splashed.

From the very beginning of this project, the folks at American Tug described the completion and launch of the boat as “late March”.  And what do you know? On March 30 they dropped her in the water.  That pretty much describes our entire experience with American Tug: 100% on everything.  More on that later.

The night before the launch was sort of a sleepless night, especially for Bruce.  Our electronics guy, Tony Wyatt of Marine Systems Northwest, worked late into the night finishing up the installation and wiring of the arch.  The full package won’t be up and running for a few more days, but much of the work is done. 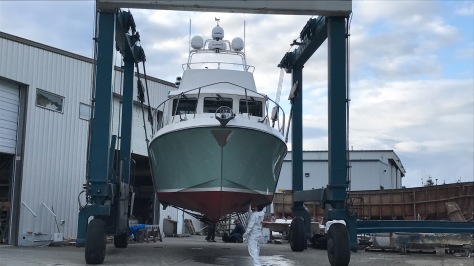 We were up early, and pretty much rubber-necked all the launch prep work, more or less (but not entirely) staying out of the way.  It was cold and cloudy, but in was finally not raining.  The pups were alongside the whole time, wondering what the fuss was all about.

As is necessary in these events, we offered a toast to Neptune and his cohorts so that they would accept and protect Esmeralde during her first days on the water.  At a later date, once her name is on her transom, we will make a much bigger fuss so Neptune knows just how serious we are about his role in her life at sea.

There were no problems with the launch.  The water stayed out, she didn’t role over, and she sat very close to her lines.  The slight list to starboard is largely due to some of our more elaborate additions to the standard boat (watermaker, fancy Vitrifrigo Italian Fridge, and a big-arse crane on the top deck), and will be corrected with some offset weights. 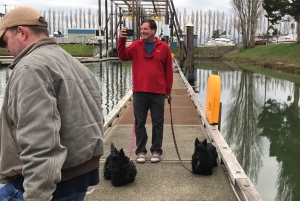 While Bruce and I hovered (annoyingly, I’m certain) like nervous parents, the Tomco crew went meticulously through their checklists.  The Cummins engineer climbed aboard to monitor engine systems.  I took up station with the drone down the channel so I would be in place as they headed out, and Bruce watched as her lines were cast off for the first time.

It was a lot of fun seeing her march up the Swinomish Channel, purposeful as a tug should be, and cheerful too, with her pretty green hull.  While she was out of sight going through her paces, we added to our jitters with coffee from the Calico Cupboard, and were waiting for her as she reappeared beneath the Rainbow Bridge on her way back from her maiden trip.

There are a few more days of final punch list items, finish coats on the interior and cleaning, and then we can move aboard.

The Waiting.  It’s the hardest part.  But worth it.

2 thoughts on “The Big Day”